The new Hollywood musical In the Heights — a classification promising scale, glitz, and exuberance, all delivered upon with fabulous generosity by director Jon M. Chu — is a film of constant, unyielding motion. Swooping cameras fly past dozens (and in one astonishing scene, hundreds) of extras, each dancer commanding their body with a degree of effortful, assured precision attainable only by the experts, unified by the choreography and yet performing with the individual flair and total self-exertion of a soloist. Even if superimposed title cards weren’t keeping us abreast of the rising temperatures in the upper-Manhattan barrio of Washington Heights, all the visible perspiration would still radiate heat off of the screen.

The translation of potential to kinetic energy is also key to the story contained within this big-city small town, where everyone knows everyone and no one’s business is private. The densely lyrical text of the pre-Hamilton Broadway smash from Lin-Manuel Miranda (his presence here kept to a minimum with a minor role as the snow-cone-slinging piragüero) emphasizes the concept of the sueñito, explained upfront as a “little dream” chased by the strivers and workhorses of the neighborhood, a hopeful industriousness announced as integral to the heritage and identity of the community.

Fast-talking charmer Usnavi (Anthony Ramos, a dynamo) wants to leave his bodega behind and return to the Dominican Republic, his crush Vanessa (Melissa Barrera) has her eye on an apartment downtown and a career in high fashion, his taxi-dispatcher pal Benny (Corey Hawkins) plans to expand the struggling business, and Stanford undergrad Nina (Leslie Grace) has dropped out to return home and get back to her roots. Gentrification’s rising rents have forced the local salon, in which a glam Greek chorus (Stephanie Beatriz, Dascha Polanco, Daphne Rubin-Vega) gossips with the clientele, to relocate to the Bronx. Change threatens this little corner of the world that New York’s Dominicans, Puerto Ricans, Mexicans, and Cubans have carved out as their own.

The strength of Chu’s direction lies in his understanding that there’s no difference to split between the cultural specificity of this insular, meticulously realized setting and the broader crowd-pleasing instincts of the song-and-dance blockbuster. The details of Quiara Alegría Hudes’ script that betray its for-us-by-us foundations for Latinos — an exterior shot in front of the famed Floridita restaurant, a quick close-up of La Flor-brand achiote, liberal Spanglish — only cement the lucid sense of place, never running the risk of alienating outsiders welcome to join the party. The visual language of an all-the-trimmings production number is universal. At the same time, the film refuses to sand off its own edges by downplaying its proud spirit of representation, which stands as a central pillar rather than mere flourishes for those in the know. In a few instances, almost all of which come from changes made for this big-screen rework, that drive to reach out can obstruct the story; consider an added frame narrative that finds Usnavi relating the main story to island children, which not only underscores its already-apparent importance as a teaching tool for the next generation, but paints the script into a difficult corner by the third act that it can’t gracefully escape.

Other additions, such as underdeveloped subplots concerning the DACA decision and micro-aggressions in white-dominated social spaces, may have been intended to confer a more timely topicality, but mostly gum up the works in practice with their bald didacticism. The inertia of these scenes in particular sets them apart from the passages of borderline-transcendent weightlessness surrounding them, the blunt statement of Big Ideas paling in comparison to the moments that show instead of telling.

Any irksome feelings left over from these false steps fade quickly, due to the goodwill accrued from the winning likability of the music, characters, and overall creative project. With Warshow’s old adage about the critic admitting he’s just another man at the movies in mind, it’s incumbent on this writer to note that Chu’s film could not have possibly arrived at a more optimal time. For many viewers, this will be their first movie back in theaters following the forced intermission of the pandemic lockdown, and though production had been completed prior to the outbreak of the COVID-19 crisis, it still feels like an express rejoinder to the past year-plus’ sedentary isolation.

Moviegoers around New York, faithfully depicted as a grimy, unforgiving, beautiful playground teeming with activity, will be especially receptive to the joyously buoyant freedom in Chu’s vision of city life. We’ve been alone and indoors for so long. Seeing bodies, skin bared to absorb the summer sun, pressed up against one another, frolicking in public pools, kissing, breathing — it’s a powerful sight. This effect will surely wear off before too long, and we’ll start taking things like proximity and collective experiences for granted again. For now, however, everything feels like a brighter and more intense version of itself, as if rebirth has sharpened all of our senses. I’m savoring it as long as I can.

ANTICIPATION.
Jon M. Chu returns to the musical, now under a brighter spotlight. 3

IN RETROSPECT.
The movies are back, folks. 3

The post In the Heights appeared first on Little White Lies. 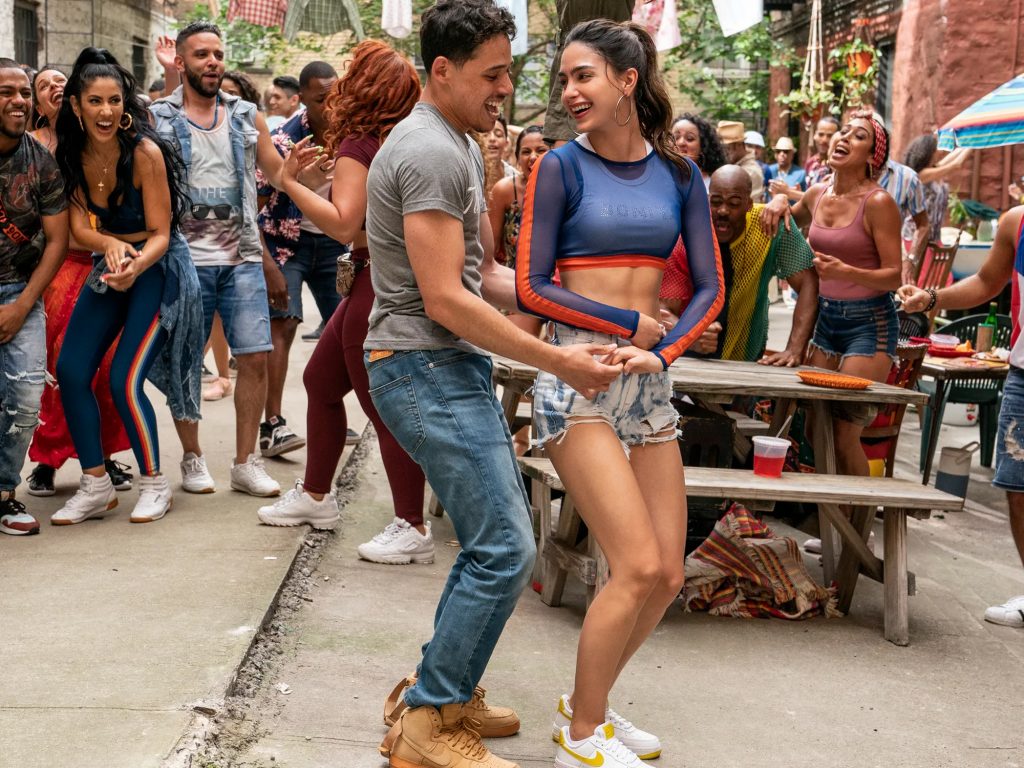