Ushering in a new Golden Age of horror that would last throughout the following decade, George A Romero’s 1968 feature debut Night of the Living Dead shifted the genre from the gothic castle to America’s present-day backroads, invented the modern zombie, and remained for many years the most profitable horror film made outside the studio system, while becoming a staple of the burgeoning midnight movie scene.

Romero had well and truly arrived, and immediately established himself as an issues-led director whose horror, for all its explicit violence and gore, offered a confronting reflection of sociopolitical tensions (the civil rights movement, the Vietnam War, the generation gap) ripped from the headlines of contemporary America.

After 1971’s romantic dramedy There’s Always Vanilla and 1972’s genre-adjacent feminist character study Season of the Witch, Romero made a full-blown return to horror in 1973 with The Crazies, another Vietnam-inflected apocalyptic allegory of an America violently at odds with itself, and his reputation as a thoughtful chronicler of America’s darker side was now cemented.

In fact, Romero made another film in 1973, one that would take four-and-a-half more decades to see the light of day. The Amusement Park was commissioned by The Lutheran Service Society of Western Pennsylvania and the Pitcairn-Crabbe Foundation to be an educational film highlighting ‘the plight of the elderly’.

Its duration of just over 50 minutes and the overt didacticism of its drama may evoke an ABC Afterschool Special, but Romero, given a specific issue to tackle, evidently could not help converting its inherent horrors into the idioms of genre. Romero’s nightmare vision of ageing in America proved altogether too disturbing for his financiers, who shelved the film. It would remain undiscovered until 2018, a year after the death of its director at the age of 77, some six years older than his film’s geriatric protagonist. The Amusement Park comes with two frames. The first involves the lead actor Lincoln Maazel (who later starred in Romero’s psychological reinvention of the vampire myth, Martin) introducing himself directly to the camera, laying out the film’s preoccupation with “the many problems which people of my age face on a daily basis,” and ending this formal prologue with the words: “Remember, as you watch the film, one day you will be old.”

In other words, the film sets out its present as the viewer’s future – much as in a later scene, a happy young couple will visit a fortune teller to “see the future”, only to be shown a vision of their old age together mired in poverty, illness and abandonment.

The film’s second frame, bookending the central narrative, takes place in a bare, sterile white room. There sits the unnamed character played by Maazel, his white suit dirty, his hair unkempt, his face bloody and bandaged, when his cheerier double arrives, with white suit immaculate, hair neat, face unmarked. It is as though we are looking at a before-and-after picture, as these two old twins respectively embody innocence and experience.

Once again, in the decrepitude and deflation of his other, the man who has just arrived is getting a glimpse of his own future. “You won’t like it,” the traumatised old man warns his chipper doppelgänger of the world outside this weird waiting room, “There’s nothing out there.” But still the newcomer heads out, and we with him, curious to see for himself the exciting, frightening world beyond, figured as an amusement park.

After a series of bizarre encounters in this funfair setting, he will, like any passenger on a ride, end up right back where he started, and we will now understand how he has come, on this circular trip, to look so disheveled and defeated. The amusement park is all at once a real place (Pennsylvania’s West View Park) and an allegorical space, where each entertainment represents a different way in which senior citizens are humiliated, marginalised or abused. Old people exchange their treasured belongings for tickets. A sign outside one ride states “Must have individual income over £3,500” as an entry requirement. An elderly couple riding the dodgems find themselves being hassled by the younger driver of another car, by a policeman and by an insurance agent.

The prizes that our protagonist wins at a sideshow are bags of groceries, but he cannot find anyone to help him carry them away. The ‘Boot Hill’ attraction, with its welcoming ‘Senior Citizens preferred’ sign, is a care home and rehab centre. Hawkers tout deals to swap homes for retirement properties. At the freakshow, curtains are pulled to reveal that the freaks are just the elderly. And the Grim Reaper is spotted several times circling patiently in the background.

The Amusement Park tracks its ageing protagonist’s journey from assurance and optimism to disorientation and despair. Carnivalesque both literally and metaphorically, it is a surreal affair, but for all its unnerving strangeness, the depressing subtext is spelt out very clearly. When we return to Maazel at the end, he advises us, “Consider now, that the man in the amusement park is a mirror image of yourself, separated only by the passage of time,” before concluding, “I’ll see you in the park, some day.”

Now we finally can see him in this 4K restoration of the lost film, although not until Maazel, Romero and even West View Park are all themselves long gone. Their loss serves as another reminder of mortality’s inevitable encroachment – the very age-old theme that this public service announcement shares precisely with the horror genre.

Yet the film’s cutting, abstract, often upsetting satire sits oddly with its po-faced pleas to viewers to volunteer with organisations that help the elderly, and perhaps this haunting study of senescence and society works better now as an eccentric curio in Romero’s filmography than it ever would have as a Lutheran public awareness campaign.

The Amusement Park streams exclusively on Shudder from 8 June.

IN RETROSPECT.
Lost and found, old and new, senescence and society. 4

Directed by
George A Romero 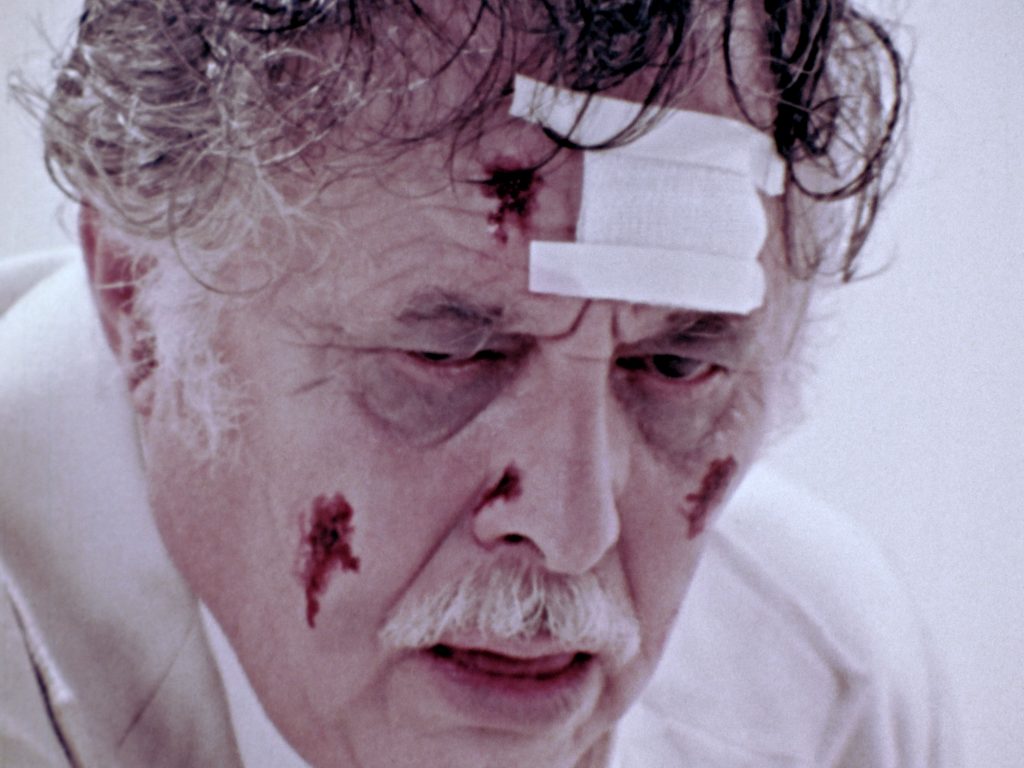