To be in Hollywood and uncompromising was a rarity, and despite her unusual steadfastness, Katharine Hepburn was no stranger to the fact. The persona she would assiduously construct and play with throughout her career was initially one of free-wheeling spontaneity. From her metallic and markedly cinematic Mid-Atlantic accent to the way she – sometimes aggressively – related to the men in her films, she brought a natural spark that introduced American audiences to the possibility of a new modern woman.

But the very real details of her unconventional life – including her tomboy attitude — quickly became a ruse, a way for studios to blur the lines between her characters and Hepburn herself, a tactic she accepted with enthusiasm. It was this that so alarmed audiences in the 1930s and ’40s, and it’s what makes Hepburn such an enduring icon today. If she wanted to be a real movie star, one remembered by future generations, she would need to compromise. And so, she made The Philadelphia Story.

By the time David Lean’s Summertime rolled around, Hepburn’s haughty tomboyishness had been done away with almost entirely, and she entered what some scholars refer to as her “spinster cycle” – a series of films that featured Hepburn as a lonely, repressed, middle-aged woman. The film follows Jane (Hepburn) as a self-described “fancy secretary” from Akron, Ohio, on her first trip to Europe, where she expects to find “a wonderful, mystical, magical miracle… what she has been missing all her life,” but can’t quite put a name to. Like Hepburn’s own life, her character is marked by compromise, a tension between her desires and what she believes to be right, often to self-destructive degrees.

Though friends often remarked on Hepburn’s lack of introspection (“Fear is no builder of character”), Lean pushed her down emotional avenues she would not have chosen herself. Hepburn moves differently here; although her sprightly humour retains its magic, it is dimmed by abstract worries and insecurities, and what remains quickly reveals itself a mask, protective gear for her shameful loneliness brought on by spinsterhood.

Early on in the film, she is left alone in the backyard of the Pensione Fiorini by the travellers’ she failed to befriend, and we get a glimpse of her buried melancholy. She walks through the terrace to and fro, hands clasped behind her back rigidly, as if holding the contents of her body together. But she distracts herself, and mesmerised by the music and noises of the city, her face opens with wonder. When two lovers come into frame, tears swell in her eyes; her aloneness suddenly becoming more tangible. Only Venice’s scenery, with its bright hues and shadowy alleyways, brings her back to herself again. Summertime succeeds in no small part thanks to Lean’s sensitivity, his mastery of the moment and the flow of time. The film moves at the pace of its season, like days spent leisurely gazing up at the interminable blueness of the sky. Actually, it takes an hour for the film to become a romance. Hepburn reacts accordingly, both spellbound by this newfound beauty and obviously oppressed by the quick passing of time.

And what better setting than mercurial Venice, a city of romance, but also one that drowns with a few drops of rain, where cobbled grounds become slippery and dangerous without warning. It’s here where Jane eventually meets Renato (Rossano Brazzi), the man who will eventually become her lover, and he brings with him the possibility of the miracle. Though initially denied, Jane’s attraction is obvious. She scans for him in crowds, hoping he will save her when she slips into the canals; her eyes, shrouded in ecstasy when gazing at St Mark’s Basilica, flutter and glint similarly in his presence.

But her desire is not straightforward, and Hepburn’s physical presence communicates Jane’s internal conflict perfectly, letting us in on Jane’s secret: she both flinches and leans into his touch, retracting her body until the tension between them can no longer be sustained. Having accepted the truth of her loneliness for so long, the possibility of union only brings fear. Of inadequacy, of loss, of future loneliness. This time with no expiration date.

Whether close to the camera or lost in a crowd, the film delights in Hepburn’s gaze, as it transforms from awe-struck and shy to careless adoration. But it’s her unique voice that becomes most revealing; both brittle and forceful, it’s another limb of her commanding presence. Though Jane herself appears unaware of its power, unlike Hepburn’s previous heroines, Hepburn tuned it with precision to build and unmask Jane.

In the company of other travellers, Jane’s voice turns solid, cheerful – one could almost mistake it for confidence. But in Renato’s presence, it crumbles. Imbued with a vulnerability unseen in most of her filmography, words fail and sentences fall apart. There’s a moment before she rejects sleeping with him when, her body pulled tight against his under the shadows of the night, when her voice cracks.

Towards the end of the film, Jane gives in and sleeps with Renato. Soon after, she admits that she’s leaving for America. “I’ve stayed at parties way too long because I didn’t know when to go. Now with you I’ve grown up; I think I do know when to,” Jane explains tearfully, knowing full-well that their romance wouldn’t survive real-world complications, like his marriage.

The warm, idyllic joy of summer ends and so must their romance. But Jane has changed. In the final scenes, she glides comfortably among the crowds, hands loose at her sides – no longer a solitary figure. As the train prepares to leave, Renato runs after it, offering Jane a gardenia. His pace is too slow, and they never meet – but an unguarded smile lights up Jane’s face, encapsulating the film’s heart with remarkable simplicity and convincing us that if we are ever to experience miracles, we must give in, completely and unconditionally. As Renato says: “We saw each other. We liked each other. This is so nice.”

Finally, body open to the world, Jane waves back at Renato from the train carriage. And, once again, she becomes Katharine Hepburn.

The post Why I Love Katharine Hepburn’s Performance in Summertime appeared first on Little White Lies. 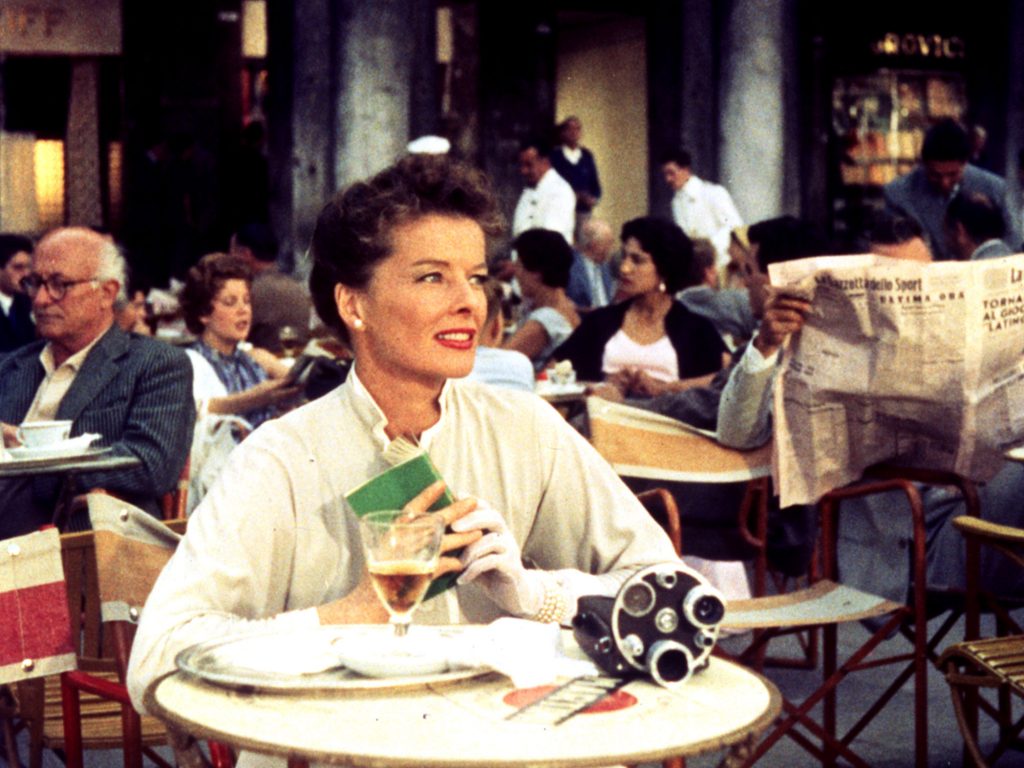