Somewhere in the vast woodland outside Portland, Oregon, Robin (Nicolas Cage) and his pig live a simple life. Their days are spent foraging for prized truffles in the forest. Evenings bring the respite of a warm hearth and home-cooked mushroom tart.

Occasional visits from young buck city slicker Amir (Alex Wolff ) to trade the fruits of their labour for essential supplies are a necessary inconvenience. Their rural idyll is shattered when intruders arrive in the night, assaulting Robin and abducting his porcine partner. When he regains consciousness, covered in blood, he limps toward civilisation (and the remnants of the person he used to be) in search of his attackers.

This outline of Michael Sarnoski’s debut might appear to share similarities with revenge flicks such as Taken or John Wick, and the casting of Nicolas Cage in the central role might hint at an inevitable on-screen freakout, but Pig defies expectations at every turn, creating a moving narrative about grief, memory and the value of food to connect us to a person or a place.

As Robin and a reluctant Amir travel through Portland searching for the missing pig, details about Robin’s former life as a renowned figure in the city’s restaurant scene emerge. The reasons for his self-imposed isolation, as well as Amir’s cocksure overcompensation, unfurl slowly, creating an investment in these characters so lovingly brought to life by Cage and Wolff. Their rapport as an odd couple in the great cinematic tradition is exemplary, but it’s the way they imbue their characters with a natural tenderness that solidifies them as two stand-outs of the year. It’s Cage’s most thoughtful and restrained performance in a long time, exhibiting a gentleness we don’t often get to see.

There are revelations, tears, and some exquisite shots of food. Sarnoski’s reverence for the natural world and appreciation of a meal made with love and care evokes Kelly Reichardt’s First Cow, while Alexis Grapsas and Philip Klein’s sublime score adds a melancholy, almost austere quality to the soundscape. There’s a visceral edge to Pig and Patrick Scola’s cinematography imbues an ethereal, folktale quality: from the sticky squelch of blood on a hardwood floor to the dim glow of a bakery counter at dawn.

Robin and Amir share the weight of familial fracture and bond over their respective scars. It becomes evident that sometimes the only way out of anguish is through confronting the trauma of the past head-on.

In fact, Pig calls to mind the lyrics of David Byrne: “I’m just an animal looking for a home / share the same space for a minute or two.” There’s beauty in even the most fleeting moments (a beautiful meal, cooked with care; a person you loved, no longer around) and that’s worth savouring in a world as cruel as ours.

ANTICIPATION.
There’s a strong buzz from the US release… 4

IN RETROSPECT.
An outstanding debut. Pair with wine and someone you love. 4 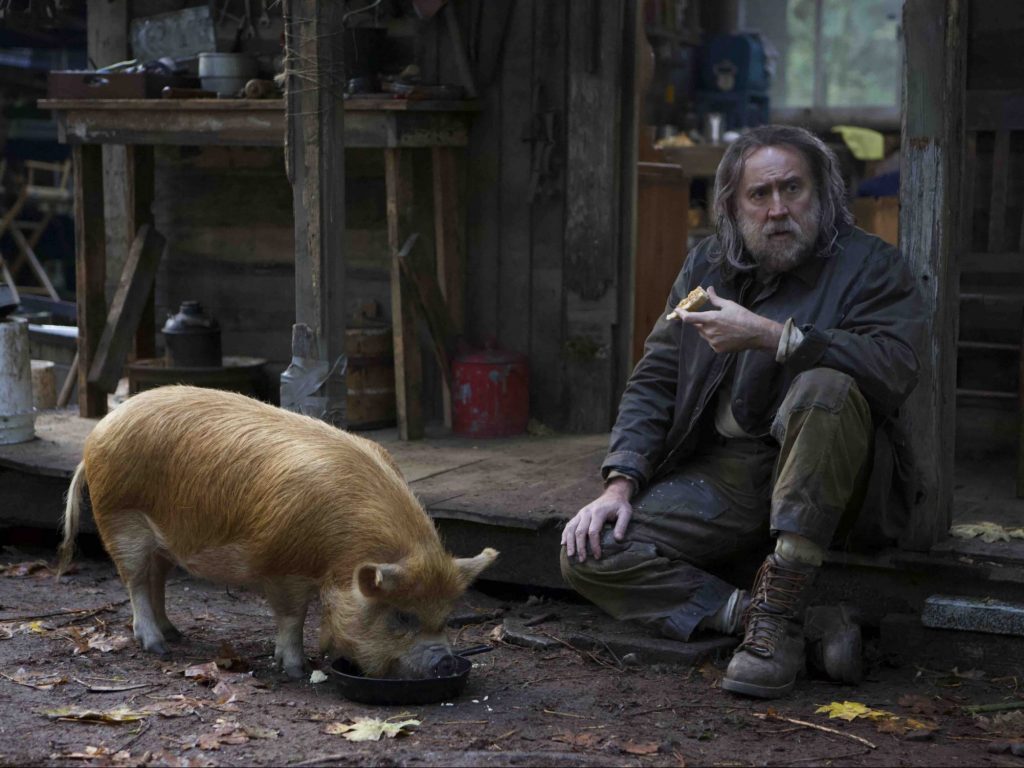