A stranger wanders into a divided community. This is the plot of George Stevens’ iconic oater Shane, as its eponymous gunfighter drifts into a local dispute and sides with the wholesome, homespun underdogs, before moving on, injured, into an unknown future (or perhaps receding forever into a lost past).

It would also subsequently become the standard plot of many a Spaghetti western, after Sergio Leone’s A Fistful of Dollars borrowed its more cynical take on this story type wholesale from Akira Kurosawa’s Yojimbo, as a duplicitous stranger manipulates both sides of a local conflict. Nicholas Ray’s Johnny Guitar came out in 1954, one year after the release of Shane, and a good decade before the cycle of Spaghetti westerns got rolling. It feels like both a rejoinder to the black-and-white morality of Stevens’ film and a precursor to the anarchy of Leone’s work.

In its approach to the received tropes of the western, Johnny Guitar was to prove so subversive that critics did not know what to make of it upon its initial release, and in measuring the against the very values and standards of the genre that it was deconstructing, they found it wanting. In the decades since, its oddness among other oaters has been both recognised and celebrated, and it has been honoured with selection by the Library of Congress for preservation in the United States National Film Registry.

For a start, the laconic stranger Johnny “Guitar” (Sterling Hayden) has not so much drifted into town as been summoned for a job. And (ostensibly, at least) not a job as a gunman – even if convention dictates that he certainly knows his way around a firearm – but as a musician at Vienna’s. He’s not even really a stranger, even if the saloon’s owner, Vienna (Joan Crawford), does not at first acknowledge that she has as much, if not more, history with Johnny as with several of the other male characters in the film.

And if Vienna, and the gang of the Dancin’ Kid (Scott Brady), Turkey Ralston (Ben Cooper), Bart Lonergan (Ernest Borgnine) and Corey (Royal Dano) that she makes welcome in her establishment, seem like the kind of folk normally associated with villainy in a western, Johnny signs up with them rather than with the decent, law-abiding cattlemen from the small nearby town of Red Butte.

Johnny Guitar is a film that makes paradoxes of our preconceptions. The supposedly good townsfolk are driven by their own prejudices – and by their self-appointed arbiter of ethics Emma Small (Mercedes McCambridge) – to become a murderous lynch mob. Meanwhile the Dancin’ Kid’s supposedly vicious gang is driven to desperate criminal action precisely by everyone’s false assumption that they are criminals (“I’d hate to be run off for something we didn’t do,” the Dancin’ Kid observes, “So let’s do something.”).

Here good people are also bad, and bad people are also good, as Ray muddies the morality of the western and by extension America’s very foundations. It is also not hard to discern, in the witch hunt carried out by these otherwise decent, upright folk, a reflection of the McCarthyist persecutions that were still running rampant at the time Ray made his film. The most subversive aspect of the film, though, is its gender politics. Johnny Guitar may be named after a man (even if “Guitar” is not his real surname), but it concerns a fight between two women (and its climactic showdown is also between these women, with the menfolk, including Johnny, left on the sidelines). In any other film, Vienna would represent the type of the ‘fallen woman’. Her saloon, regarded by locals as a den of iniquity, was built, as she freely admits, on her back. But it is a far classier joint than is normally seen in an oater, lit by chandeliers and staffed by croupiers and barmen dressed in clean, matching suits.

All this style seems incongruous given the saloon’s location in the middle of nowhere, beyond the limits of Red Butte (which is already only a small town). Yet Vienna – whose very name is a marker of civilisation – correctly sees her property as an investment in the future (“I intend to be buried here,” she says, “in the twentieth century”). For she knows, having “exchanged confidences” with a surveyor, that soon there will be a railway track passing right through the spot where she has staked her fortunes. This same coming change which Vienna happily rides, the rest of the townsfolk fear.

When Johnny first sees Vienna she is upstairs, sporting trousers rather than a dress, and also very much wearing the pants in this establishment, with all the men who work under her also literally looking up to her. “Never seen a woman who acts more like a man,” as employee Sam (Robert Osterloh) points out. “She looks like one, thinks like one, and sometimes makes me feel like I’m not.” Another employee, Old Tom (John Carradine), tells Johnny: “I never believed I’d end my years working for a woman – and liking it.” Not long afterwards, Vienna adopts the same pose on the staircase in confrontation with an armed posse of men from the town, calmly but firmly proving herself very much their superior.

Like Vienna, Emma freely adopts traditional male roles, leading the men’s hunting parties and showing a willingness, even a keenness, to hang Vienna that her male partners by contrast openly lack. Yet unlike the sophisticated Vienna, Emma is small-minded and censorious, and bordering on psychopathic in her vendetta. That the two actresses famously did not get along (putting it mildly) on set only adds to the on-screen tension between them.

Though surrounding themselves with men, between them these two women both call the shots and eventually fire them, while Vienna, like Euripides’ ‘Medea’, lays out the societal double standards that have made her ascent (as queen of a domain she built herself) so improbable, so impressive – and so modern. If she likes to hear the sound of a roulette wheel turning, perhaps that is because she has spent her life playing against the odds, in a film where fortunes change rapidly.

“When a fire is burnt out, all you have left is ashes,” says Vienna of the relationship that she once had with Johnny, and that Johnny hopes to rekindle, using imagery that also foreshadows the film’s climactic conflagration. For Philip Yordan’s screenplay – adapted from Roy Chanslor’s 1953 novel, which was dedicated to Crawford, and which she had personally optioned – comes with the hard-boiled clip of a film noir, but also with a weighty resonance that makes every word count.

Johnny Guitar was shot in Trucolor, and its visual style constantly undermines the naturalism more normally associated with the western. Crawford, in particular, is always lit by DoP Harry Stradling to glow – an oasis of glamour, power and allure in a desert that does not want her there. Ray’s film is a western, but it is also an amplified melodrama, with a rich seam of deviant psychology just waiting to be disinterred from its dusty surface. Its time has come.

Johnny Guitar is available on Blu-ray for the first time in the UK from 20 September as part of Masters of Cinema series for Eureka! Entertainment. 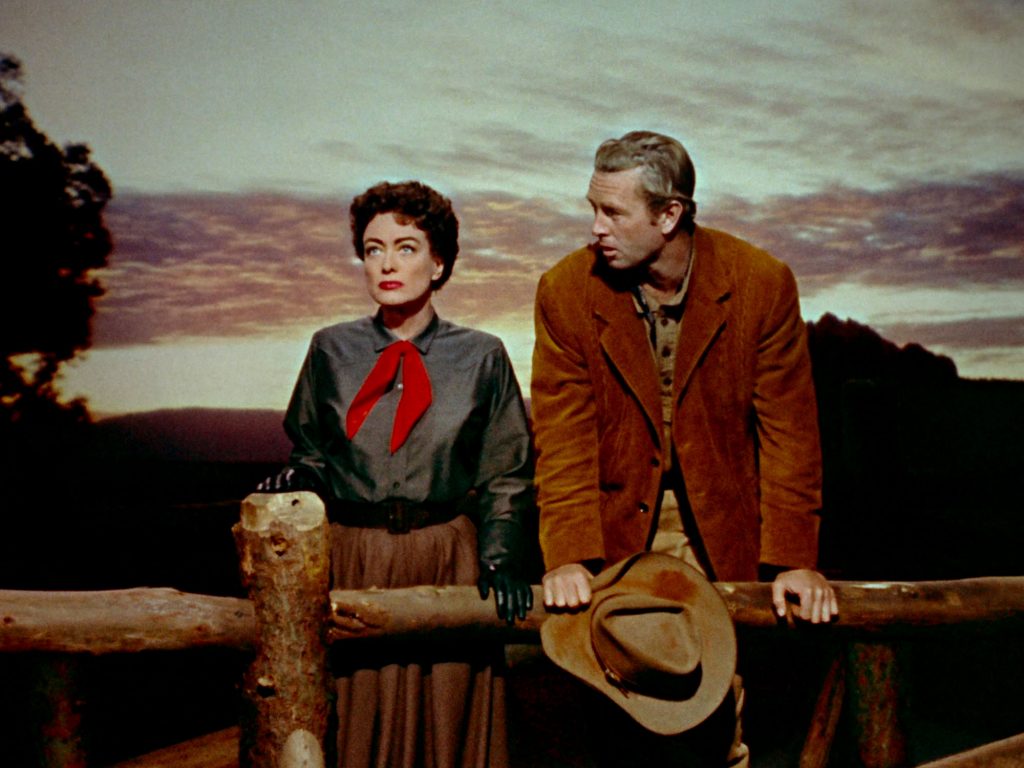