Sometimes, when I can’t sleep, I think about what will remain of me when I die. What will people remember? What will people say? What images, or videos, or words from my three decades shuffling around the third rock from the sun will endure beyond my passing?

There’s a line from Chuck Palahniuk’s 2003 novel ‘Diary’ that I think of: “We all die. The goal isn’t to live forever, the goal is to create something that will.” Of course, it’s impossible to predict what our ancestors will one day remember from our culture. Maybe the heat death of the universe will render all of this a moot point before it really matters. But Jackass – that gross-out MTV mainstay that has endured for two decades – implies a certain longevity with the cheeky title of its fourth feature film. Jackass Forever. Who am I to disagree?

The pranks are as lewd and crude as ever, the cast are nude, yet against all reason and sense, there’s something incredibly wholesome about the entire affair. After filming shut down during the pandemic (and then again a few times due to cast injury), the magic is still very much intact: there’s no sense of going through the motions with these rascals. They look as stoked to be causing mischief as they were in their MTV glory days.

An often-overlooked element of the Jackass films is their technical artistry. Here slow-motion technology is utilised better than in most modern blockbusters, and camera angles catch the granular detail of bodily carnage. They might be recording scorpion stings or grown men getting hit in the balls with hockey pucks, but the team behind Jackass (director Jeff Tremaine, cinematographer Dimitry Elyashkevich and a camera crew that includes Lance Bangs, Chris “Raab Himself” and Rick Kosick) put a lot of thought and attention into the cinematic experience. Regardless of the mileage one gets out of bodily fluids and pain endurance, there’s no accusing the creative team of slacking off.

This seems most evident in the set-up of stunts. From the film’s Godzilla-themed opening sequence to an incredible prank entitled ‘Silence of the Lambs’, the cast are as foolhardy as ever, and their new friends are just as game for a laugh. The MVPs include Jasper’s dad, Compston “Darkshark” Wilson, described as an ex-con, ex-gangbanger, who has a fear of insects, and a cameo from musician Tyler the Creator who gives Jackass Forever one of its greatest lines of dialogue. These supporting players add a sense of community around the Jackass gang – friends and family who are equally up for getting down and dirty in the name of comedy. The pandemic has changed the way many of us live and communicate. Friendships have fractured under the strain of isolation and misinformation. We’ve all turned to comfort shows and films to provide some temporary respite, and Jackass is no exception. There is something inherently comforting about the familiarity of MTV’s enduring export, but there’s also something tender in seeing a group of friends reunite on the big screen, chemistry fully intact. Fame may have changed them, but at the same time, it’s changed nothing at all. Chris Pontius still needs no excuse to get naked. Steve-O is still being catapulted through the air in a portaloo. Most pertinent, no matter how much they goof on each other, is that the Jackass gang are always there with a hug and a clap on the back for a stunt gamely undertaken.

In the age of the prequel, sequel, remake and shemake, Jackass Forever delivers exactly what you expect (with a few welcome surprises along the way). The only weakness is the enduring reliance on animals for stunts: while a scene involving a tame bear is amusing, it seems cruel to be baiting scorpions and snakes in the present age, especially when the crew are clearly funny and ballsy enough to come up with plenty of pranks that don’t rely on the involvement of animals.

It’s one thing for a person to consent to a dangerous situation, but an animal can’t provide that, and putting them in stressful situations in the name of laughs feels increasingly unnecessary. This is the only real stumbling block the film faces, alongside the slightly lacklustre addition of Rachel Wolfson, who doesn’t quite seem to have the chemistry the rest of the cast share, which might be down to her limited screen-time or background as a comedian rather than a prankster.

Is it likely to convert any naysayers? Well, no. Either you find physical comedy funny, or you think it’s all a bit… juvenile. But in a packed cinema, surrounded by people who have committed to the carnage as much as you, it’s the most communal joy I’ve experienced in months – a pure endorphin rush fuelled by those bold enough to push the limits of human endurance.

It brings to mind reports of how the audience reacted when the Lumière brothers captured the arrival of a train at La Ciotat station, and legend has it people screamed and ran to the back of the room. At Jackass Forever, audiences members hooted and hollered, gasped and cried out. It was a beautiful sight to behold.

This is, to me, what Get Back was to people who love The Beatles – a chance to relive a bygone era, to bear witness to idols who have shaped such a large part of my life, and appreciate that, yeah, it’s silly, but silliness doesn’t preclude thoughtfulness. This comforting, crass blast from the past confirms the Jackass gang as modern-day legends. Pandemics come and go. The tides turn and pop culture trends live and die on the whim of social media. But Jackass? Baby, Jackass is Forever.

ANTICIPATION.
My whole life has been leading to this. 5 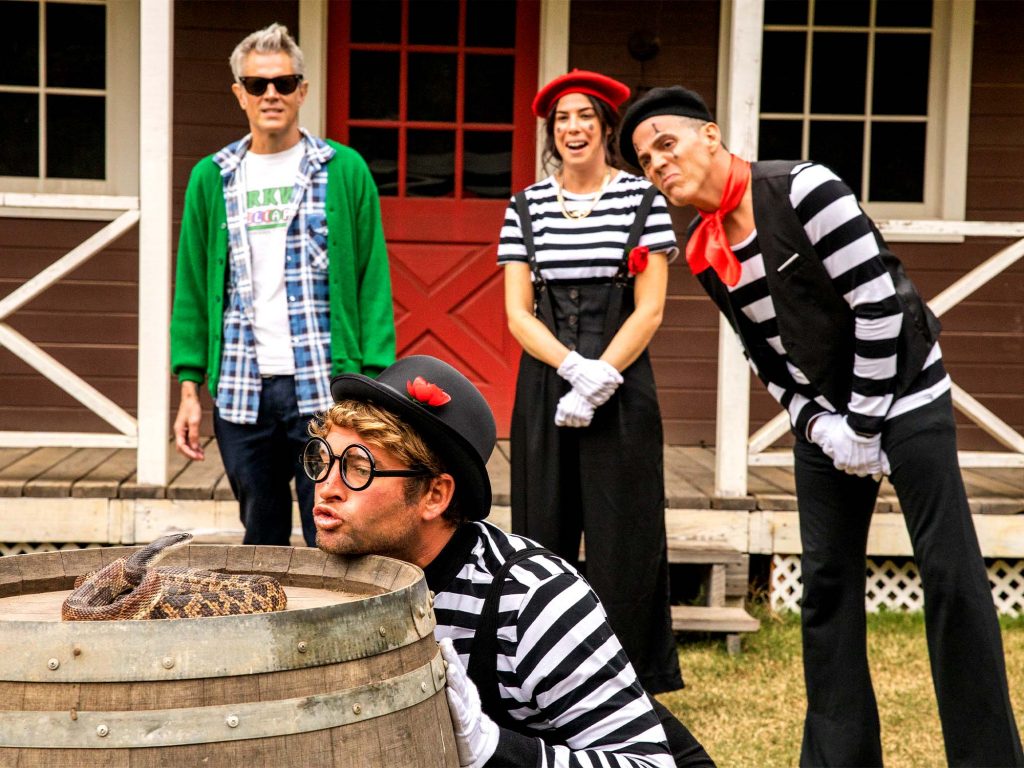