When Alexander Skarsgård was a child, his family used to spend their summers on the idyllic Baltic island of Öland. Sweden’s second-largest island is coincidentally home to their royal family’s summer residence. In a manner, the Skarsgårds form a dynasty of their own, with patriarch Stellan one of the most recognisable Swedish actors of all time, and four of his eight children – Alexander, Gustaf, Bill and Valter – also pursuing careers in film and television. In fact, it was a friend of his father who gave Alexander his first acting role at the tender age of seven, in Åke and His World (he played Kalle Nubb, the eponymous Åke’s best friend). But during his childhood holidays on Öland, he was more interested in the runestones that littered the island’s landscape.

“I remember looking at those runestones, and the inscriptions were telling tales of Viking expeditions down to Constantinople, and it just fascinated me tremendously,” he recalls
down the line from Stockholm, where he’s spending time with his family before embarking on the press tour for The Northman. “Since then I nurtured this dream of one day looking at a great epic Viking movie.” With its ambitious scale and classic tale of betrayal and revenge, The Northman is the product of that whim, but it wasn’t the most straightforward path for Skarsgård to realise his simple childhood dream.

After playing the lead in a Swedish television movie as a teenager (Hunden som log aka The Dog That Smiled) Skarsgård found himself uncomfortable with being in the public eye, and told his parents he didn’t want to act anymore. He stayed out of the spotlight for seven years, completing his Swedish national service and, eventually, moving to England, where he attended Leeds Metropolitan University and studied English for six months. “I intentionally wanted to go to Leeds because I wanted the quintessential British experience,” he explains. “A lot of my friends went to London, and I knew that if I were to go to London I’d end up hanging out with tons of Swedes. Leeds was changing when I was there but it was quite a provincial town 20 years ago, and that was something I wanted. I didn’t want to go to a big cosmopolitan city, I wanted something very British.”

Yet the acting world proved a draw once again, and after his time in Leeds, Skarsgård moved to New York to study theatre. He returned to Stockholm six months later but his time studying had confirmed that he wanted to pursue a career in in front of the camera. Various roles in Swedish film and television followed, plus one scene-stealing small part as dim-witted supermodel Meekus in Ben Stiller’s Zoolander, who perishes in a gasoline fight explosion.

It was in 2007 that Skarsgård was cast in HBO’s Generation Kill, a dramatic mini-series about the 2003 invasion of Iraq, based on the book of the same name by reporter Evan Wright, who spent time embedded with the US Marine Corps. He played Staff Sergeant Brad ‘The Iceman’ Colbert: a towering, inscrutable soldier admired by his contemporaries for displaying calm under pressure. Skarsgård was a natural fit: his Colbert is the lynchpin that holds the unit together, and his coy, almost unknowable screen presence keeps the audience at bay, though never to the show’s detriment. Instead we gain a sense of the strangeness of being a man at war, literally responsible for the lives of others, working under the constraints of a regime that never should have put soldiers in the Middle East to begin with. Generation Kill only appears more harrowing in the rearview, some 15 years after it first broadcast, knowing so little has changed about American (and, to an extent, British) geopolitical rhetoric. But Skarsgård’s performance as a man trying to do his job in the most impossible of situations still shines – it remains one of pop culture’s enduring reminders that war is a mundane, machismo-infused hell.

Yet it was another HBO series which truly catapulted Skarsgård to stardom: Alan Ball’s lusty vampire saga True Blood, in which Skarsgård played the Viking Vampire prince Eric Northman. “When we shot flashbacks on True Blood, when Eric was human during the Viking age, those were some of the highlights of the entire series for me. I had such an incredible time,” Skarsgård recalls. He quickly became a fan favourite, owing in no small part to Northman’s sardonic sense of humour and ruthless cunning. Seven seasons of blood- sucking hijinks followed, along with a strong fanbase online and offline (Skarsgård was a mainstay at San Diego Comic-Con during the height of its powers). This makes The Northman the second time he’s played a Viking prince (it’s worth noting his Danish co-star, Claes Bang, played Dracula in the BBC’s 2020 miniseries). Is there some sort of Scandinavian rite-of- passage which requires their acting exports to play vikings and vampires at some point in their career? “Those are the two boxes you have to check and then you can retire as a Scandinavian actor,” Skarsgård laughs. “Vampire and Viking. Preferably both at the same time as I did on True Blood. The grand slam.”

Skarsgård’s Northman is a pleasing contrast from True Blood’s more dour central vampiric presence, Bill Compton, although the two maintain an uneasy alliance throughout the show. For Skarsgård, it was a lot of fake blood and real nudity. “I’m still trying to wrap my head around the fact that there’s no problem with violence, but I have to sign these legal documents if I show my ass on screen,” he told Newsweek in 2009, prior to the third series of True Blood airing. “It’s really not like that in Europe.” Despite his Hollywood star rising with the vampire boom and his short-but-sweet cameo in Lady Gaga’s ‘Paparazzi’ music video, Skarsgård continued pursuing interesting roles in off-kilter films. During a weekend off filming Generation Kill in Namibia, he returned to Sweden to lend his voice to Tarik Saleh’s inventive sci-fi animation Metropia, and in 2011 played a supporting role in Lars von Trier’s Melancholia, a haunting portrait of depression amid the impending apocalypse.

Skarsgård’s taste for selecting a mixture of high-profile and more left-field roles has quietly made him one of cinema’s most intriguing performers, and he has a particularly sharp eye for talented directors, as demonstrated by the two films he made in 2015: the Duffer Brothers would go on to create Netflix’s smash hit Stranger Things, but first Skarsgård starred in their prescient pandemic thriller Hidden, and while Marielle Heller pulled in big names for her biopics Can You Ever Forgive Me? and A Beautiful Day in the Neighborhood, her debut The Diary of a Teenage Girl – in which Skarsgård plays the lecherous Monroe Rutherford, who begins a relationship with his girlfriend’s teenage daughter – remains an underseen masterpiece. Moving fluidly between portraying archetypal heroes (The Legend of Tarzan) charming dirtballs and outright psychopaths (Straw Dogs, Hold the Dark) is no small feat, though Skarsgård makes it look easy. His filmography stretches an impressive range of genres, and in 2018 he received an Emmy, Golden Globe, and Screen Actors’ Guild award for his portrayal of Perry Wright, menacing, abusive husband to Nicole Kidman’s Celeste Wright in David E Kelley’s television series Big Little Lies (amusingly, and perhaps telling of Hollywood aging standards, Kidman now plays Skarsgård’s mother in The Northman). Where others might decry the changing shape of the entertainment landscape, Skarsgård remains optimistic.

“The landscape has shifted in the past couple of years and it’s veered more towards exclusive IP and big franchises and spin-offs and sequels and remakes, but I’ve been very fortunate,” he says. “Television today is much more interesting than it was 30 years ago, so the fact is that we can oscillate between television and movies in a way that was a bit trickier a couple of decades ago, when you were either a television actor or a movie actor. The talent behind the camera in television is just phenomenal. There’s always billions of streaming services, there’s so much content out there that I find it quite an exciting time to be an actor, to be honest. It’s difficult for mid-range movies, if they’re around $20-30 million, to get made today, because the moviegoing experience has gone a bit more towards a big tentpole experience.”

It’s undoubtedly Skarsgård’s pragmatic approach to the industry that has sustained his career for three decades. Not to mention his versatility, which saw him portray a menacing racist husband in Rebecca Hall’s Passing and a mild-mannered geologist in Godzilla vs Kong in the same year. But The Northman is a passion project, with Skarsgård serving as producer and executive producer. The culmination of a lifetime spent eking out a career playing difficult, often outright unlikeable characters, Prince Amleth is a hero, yes (Shakespeare nicked the story for ‘Hamlet’), but in true Skarsgårdian fashion, it’s never quite that simple. He’s also a battle-hardened Berserker, who will stop at nothing to wreak vengeance on those who destroyed his family.

It seems like a natural fit for writer/director Robert Eggers, then, with two similarly strange and poetic films under his belt in The Witch and The Lighthouse. Eggers came to the project through a happy accident. “I teamed up with Lars Knudsen, the producer who is also a fellow Scandinavian, he’s from Denmark. We had the intention of making an authentic Viking epic, and we were bouncing around ideas, but around that time I had a meeting with Rob regarding another project,” he explains. After that came Sjón – Eggers’ co-writer – the Icelandic author, poet and musician who also co-wrote 2021’s Lamb with Valdimar Jóhannsson. “I was very excited about it being an American movie with a Scandinavian team behind it,” Skarsgård reflects. “Lars being Danish, myself being Swedish and Sjon being Icelandic – it was so important to have an author who understood the culture.”

The Northman gave Skarsgård and co the chance to create something they hadn’t seen before in Hollywood: a Viking epic on the scale of Spartacus or Gladiator, but one that blurs the line between myth and reality. “To each of the characters a thousand years ago, the gods were as real as the horse we were sitting on, or the trolls in the forest, the Norms that would lead the fate of men. It wasn’t a choice to believe. We tried to capture in the movie that these supernatural elements are all, in the minds of these characters, completely real.”

This tracks, given the lack of differentiation between supernatural and natural in Eggers’ past work: mermaids, witches and talking goats are all presented as fact. As to why the Vikings’ popularity endures after all these years, Skarsgård has some theories: “They were such intrepid explorers who went into the unknown, they came across oceans a thousand years ago into foreign lands with no idea what lay beyond the horizon. In Norse mythology, the gods are fallible. They’re tricksters and they’re not omnipotent, which makes them more relatable.”

Skarsgård could just as easily be talking about many of the characters he’s played, who are steeped in flaws and oscillate between charming and menacing on a moment’s notice. But The Northman – in tribute to the homeland he loves and the craft he once thought he should walk away from – represents something truly special within his body of work. Amleth, wronged Viking prince, will have his vengeance – and Skarsgård will reap the rewards. 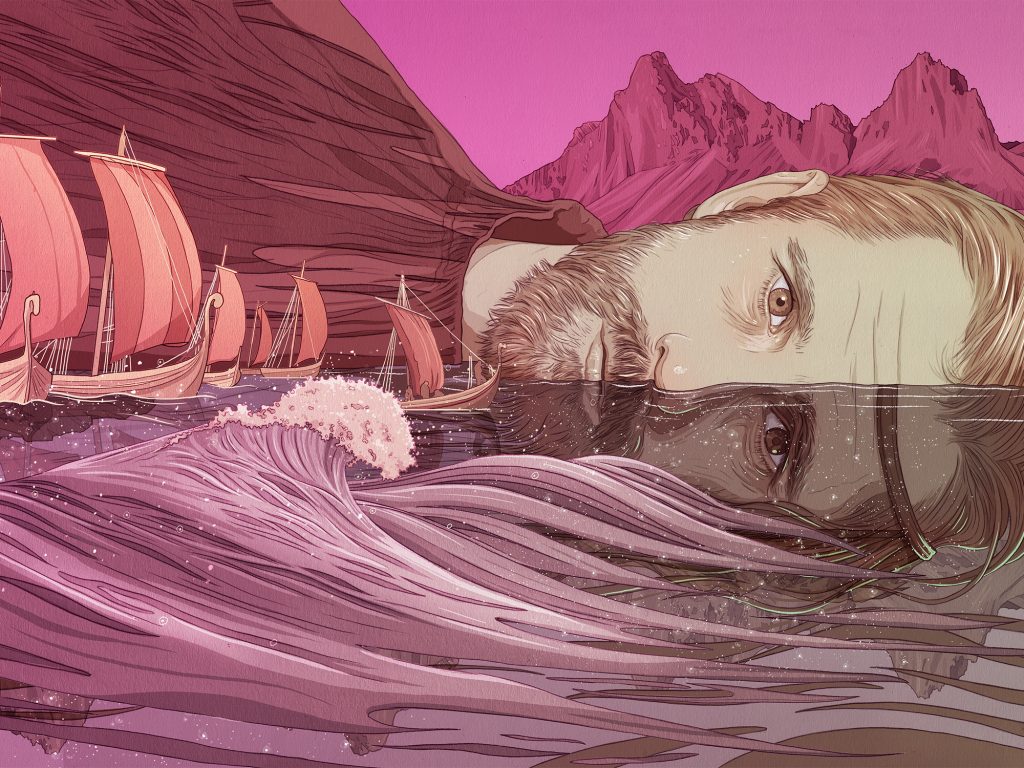