Tom Cruise’s passion for running in film is notoriously insatiable. Scything the air with his arms and slamming tarmac with his soles has been his preferred exercise routine for decades. That unerring, shark-like forward momentum has gradually evolved, moving off the ground, to ankle-breaking aerial leaps and helicopter manoeuvring heroics. But now, after spending so much time hurtling forwards, Cruise is moving faster than ever before – to start looking back.

Thirty-five years since we left Maverick, the cocky, Righteous Brothers-singing, trophy-chasing test pilot, we find that he’s not totally outgrown his high-flying youth; in fact, he lives in an aircraft hangar. In a thrilling and surprisingly ethereal opening, Maverick pushes a test plane to 10 times the speed of sound, despite the objections of Ed Harris’ Admiral Cain.

Told that “the future is coming” and he’s “not in it,” Maverick is subsequently grounded and sent to teach a new group of pilots the ropes and prepare them for an intricate bombing mission. Unlike the vague backbone of competition that the original film was built around, this mission is all about working together (albeit unquestioningly, against a vague enemy).

The jostling between past and future is where the film is at its most interesting, and where it spins out. Alongside Harris’ glaring commanding officer, Glen Powell’s inclusion as a cavalier hotshot sees two actors who have both played the test pilot and Mercury Seven astronaut John Glenn (Harris in The Right Stuff; Powell in Hidden Figures) trap Maverick between his overconfident youth and a more regimented future. A brief appearance from Val Kilmer’s Iceman is touching, forcing two characters defined by action to pause and, thoughtfully navigating Kilmer’s struggles with throat cancer, use words. It’s a sweet and low-key moment in a film that’s anything but, although it’s frustrating that Iceman’s story ultimately serves as a strange, saccharine meta-memorial for an actor who is very much alive.

Back in school, Maverick’s teaching initially offers a refreshingly unified, collegiate approach to flying, foregoing the exceptionalist politics of the original; but this is a Tom Cruise film, so he must be the hero. The film’s best sequence sees Maverick prove that his student’s seemingly impossible mission is no such thing. Joseph Kosinski’s direction straps us in the cockpit; instead of letting planes fly by to show how fast they are, we’re in one, feeling the acceleration via squared off close-ups of wobbling cheeks and petrifyingly close terra firma.

On a big, loud screen it’ll have your palms slipping off the arm rests, but this is also an example of the film’s unbalanced trade-off between the generations. We’re introduced to a new breed of pilots: they can work together, they’re not all men, and they’re not all white; but by the end of the film, it’s the seasoned pro, using a plane from the good old days, that’s going to save the day.

Top Gun: Maverick is an extremely enjoyable thrill ride, yet its focus on intense, immersive action doesn’t allow much room for lighter, steamier fun like its predecessor. Politically, the series may have evolved beyond the brazen military recruitment of the original, but the sonic boomers still come out on top.

ANTICIPATION.
Ready and excited to re-enter the danger zone. 4

ENJOYMENT.
Kosinski pilots some incredible action, but is there much else? 4

IN RETROSPECT.
A safe enough flight that’s not without turbulence. 3 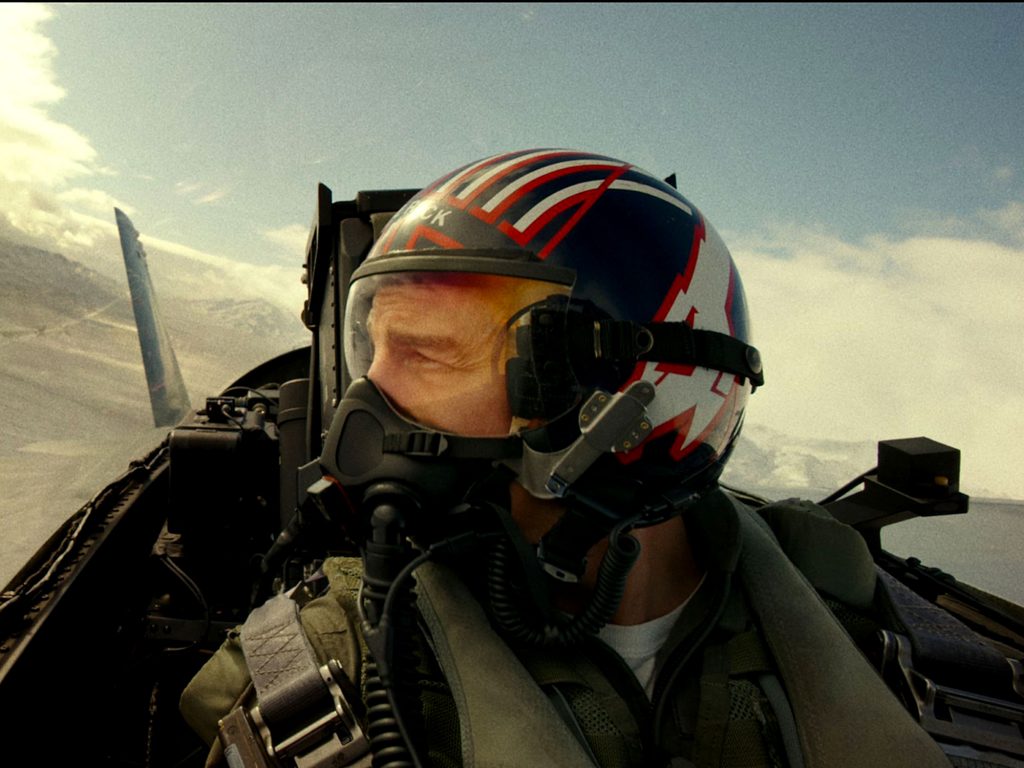