Ron Underwood’s Tremors opens with Valentine McKee (Kevin Bacon) standing on the edge of a rocky cliff, and urinating onto the ground far below. He is first shown from the front in an extra-wide shot too distant to allow any close detail to be seen. He is then shown from behind in a medium shot – but by the time he turns around to face the camera he has already done up the zip on his jeans.

Consequently, in both shots, his ‘trouser snake’, though key to what has just happened, remains invisible, in a touch of what is as much coquettish flirtation with the viewer as prudish decorum. ‘Val’ then gives his older pal Earl Bassett (Fred Ward), asleep in the back of the pick-up, such a loud and rude awakening that the alarmed slumberer falls out and onto the ground, still wriggling in his sleeping bag like a worm. Concealed snakes. Worms in the dirt.

It is all careful foreshadowing for a creature feature in which giant prehistoric nematoda – soon earning themselves the local nickname ‘graboids’ – will surface from their hiding places beneath the earth to eat anything that moves or makes a noise, including the already tiny human population residing in the ‘city’ of Perfection. Indeed, the brilliant title of Brent Maddock and S. S. Wilson’s original script was Beneath Perfection.

Yet even before the worm turns, Val and Earl are in a hurry to get out of town and away from their dead-end jobs as workers for hire. “Nobody handles garbage like we do,” complains Val, adding: “This is low, we have to set our sights a little higher” – and that is before they both get showered in shit while trying to empty a cistern. There is a self-conscious reflexivity to Val’s words, as they comment not just on the low-rent career – but also on the trashy B-movie genre – in which this odd couple has become trapped.

Yet try as they might to escape their narrow horizons, one thing or another keeps undermining their dream of departing for better prospects elsewhere. Plus, as Val suggests, here, in this wide valley, they have ‘freedom’ – freedom not just to do what a man’s gotta do, but perhaps what a man desires to do too. There is certainly a question mark over the precise nature of the relationship between these two men who both work and live together. Val may talk about his ideal (i.e. unattainable) woman, and when the graduate seismologist Rhonda LeBeck (Finn Carter) visits Perfection to do some fieldwork, she may come between the two men, but nonetheless, Val and Earl are the Bert and Ernie of ‘handymen’, always squabbling – and finishing one another’s sentences – like an old married couple.

Meanwhile, every time they try to transgress their small town’s limits for a bigger, brighter future together, their journey keeps being stopped, whether by the discovery of human cadavers or by rock-fall roadblocks. Soon these cowboys find themselves pulled right back into the centre of Perfection and under siege along with the remaining townsfolk (including a gun-nut survivalist played by country singer Reba McEntire, who also provided the film’s closing song), as they are beleaguered by destructive, hungry and fast-learning monsters of the underground which come with a decidedly phallic appearance, and whose ever more insistent presence can no longer be denied.

Tremors combines the gigantic worms from Dune and (a hilariously slowed-down version of) the cross-country truck dash from George Miller’s Mad Max 2 (1981), while getting everybody to play the floor is lava over a very wide desert area. Propelled by impressive practical effects, this is an oater-inflected monster movie which fully embraces its own icky absurdity and literally low culture – but the film’s hidden weapon is a strong focus on characterisation. For by taking its time to introduce the denizens of Perfection, and to show the eccentric interactions between this motley crew, Underwood’s feature gets us to like and care about all those who are endangered, so that we can laugh along with their banter even as we worry about their fates.

Here comedy and horror are perfectly balanced on a cliff’s edge – which is also where Tremors began, and where it ends. For Val will ultimately be once again atop the rocky outcrop, surveying from his elevated position the splattered landscape of genre beneath, while still gleefully taking the piss. Now that this Valentine is literally caught between Earl and Rhonda, between homo and hetero, and between a rock and hard place, a snake will burst its head out once more, in a gloriously preposterous piece of ring composition that finds monstrous expression, ejaculation even, for all the film’s buried sexual tensions, even as the dragon is defeated, or at least once more repressed. From this climactic act was spawned a batch of straight-to-video sequels, and even a TV series spin-off, suggesting that these worms had legs.

Tremors is released as a UHD Steelbook for Zavvi, 4th July, 2022, by Arrow Films

The post Revisiting Tremors, the cult monster western with a sense of humour appeared first on Little White Lies. 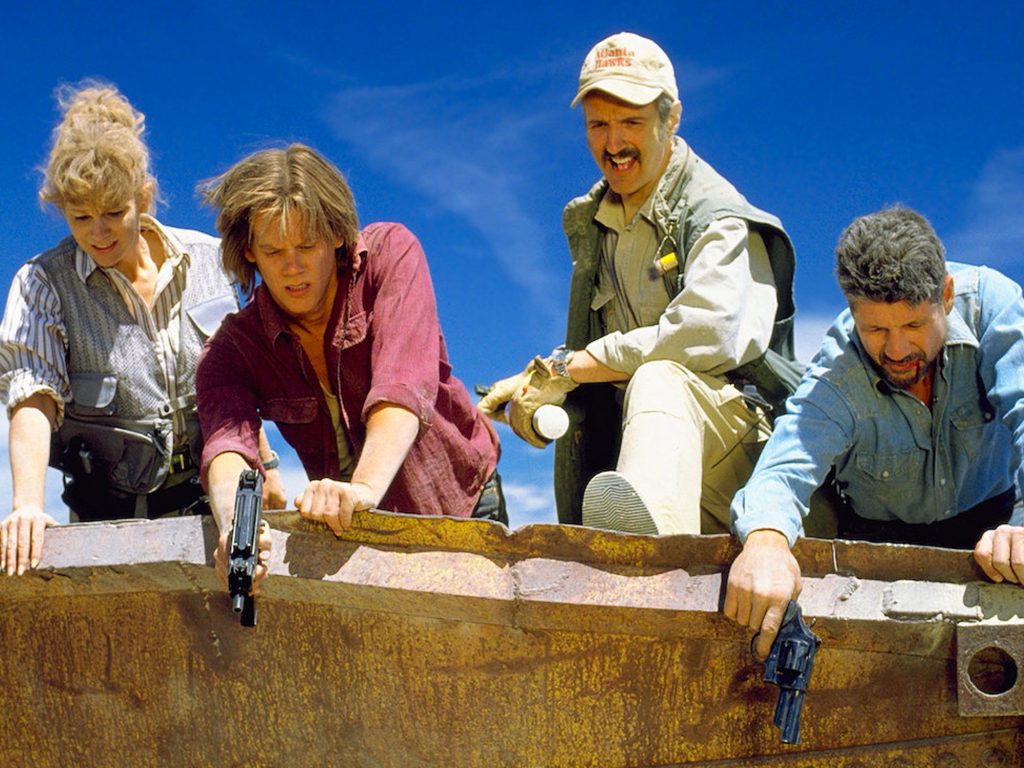