Welcome to How’d They Do That? — a bi-monthly column that unpacks moments of movie magic and celebrates the technical wizards who pulled them off. This entry looks into the making of the impossible mirror scene in Contact.

Contact takes place at the crossroads of belief, truth, and reality, which is fitting. Because this film contains a shot that will make you question all three of those things.

Based on Carl Sagan’s novel of the same name, Robert Zemeckis’ 1997 sci-fi drama follows Dr. Eleanor “Ellie” Arroway (Jodie Foster), a SETI scientist chosen to make first contact with extraterrestrial life. Ellie inherited her passion for astronomy from her father, who passed away from a heart attack when she was a child. Early in the film, there is a flashback of the night young Ellie (Jena Malone) found her father collapsed on the floor. As she rushes to his side, he reaches out for help, and Ellie, distraught, runs to fetch his pills from the bathroom cupboard upstairs.

She sprints frantically up the stairs. When she reaches the landing, like a nightmare, time slows to a crawl. Every second feels stretched, near-frozen, and precious. Then, reality breaks: the camera pulls back to reveal that everything we’ve seen has been a reflection in the cabinet mirror. Ellie grabs the pills, the door closes, and we see a reflection of a photograph of Ellie and her father. How was all of that a reflection? Did they use a double? Where was the cameraman? How the hell did they do that?

How’d they do that?

There is no mirror in this sequence, only simple, but clever, compositing.

The DVD for Contact contains not one, but three commentary tracks. One of which is by the film’s visual effects supervisors, Ken Ralston and Stephen Rosenbaum. During the hallway scene, the pair explain that the goal was to find a way to convey the intensity of Ellie’s emotional state without showing her father. Indeed, from the slow-mo to the final reveal of the photograph, every single element of this sequence puts the story first. Which, VFX aside, is a big part of why this sequence is so unforgettable.

Originally, the moment where Ellie discovers her father looked very different. In an interview with vfxblog, Ralston describes how the initial vision was for something resembling modern-day bullet time: “…[Ellie’s father] was going to be in mid-fall with a lot of things flying in the air but frozen there while she is walking around her father, looking at him.” During production, the focus of the scene shifted towards just Ellie.

What appears to be a continuous shot is, in fact, two shots and one still plate. These three elements come together with the help of a blue screen located on the bathroom cabinet where the mirror should be. 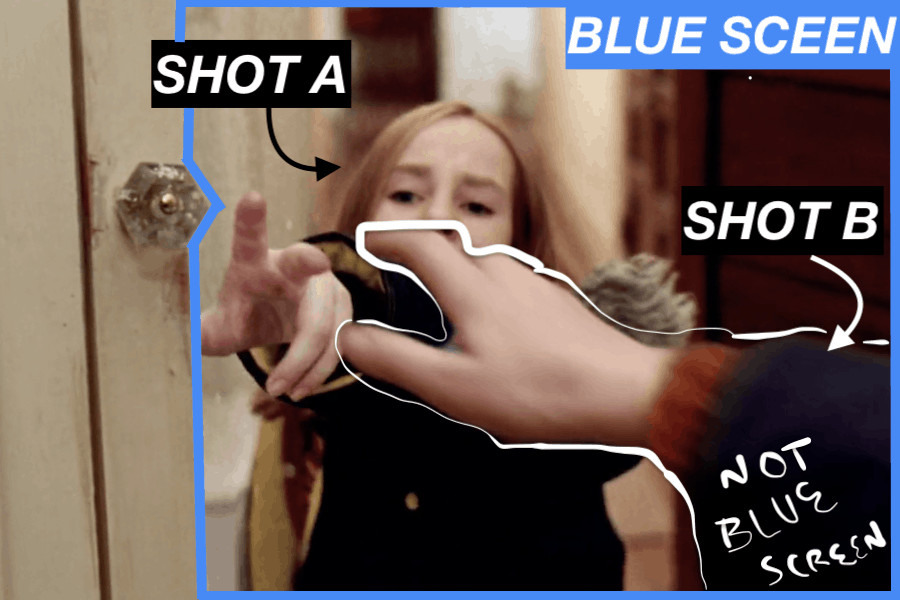 In Shot A, the camera is pointed at Ellie as she runs up the stairs and down the hallway. It ends with her extending her hand towards the (non-existent) cabinet handle. An operator with a Vista Vision camera strapped to his chest ran backward down the hallway, tracking Malone. “Our camera operator, who was also a great Steadicam operator, had to keep running up those stairs with [Malone] over and over…he was dying,” describes Ralston. The slow-motion effect, which begins once Ellie reaches the upper landing, was achieved by ramping up the framerate. According to Sheena Duggal, Contact’s compositing supervisor, the focus-puller had to be painted out of the entire shot. No small feat in 1996.

In Shot B, the camera points towards the blue screen on the cabinet and pulls back matching the tracking speed in Shot A. This movement synch between the two shots is a huge part of why the effect feels seamless. The smooth “transition” between Shot A and Shot B gives the impression that we are always, impossibly, moving backward in one continuous motion.

The real brain-breaking moment in the sequence is when Ellie slow-runs through the doorway of the bathroom. As she passes through, the handle of the bathroom cabinet emerges from the lower-left corner of the frame. However, because our focus is on Ellie, the peripheral cabinet handle reads like a doorknob. Perhaps the doorknob of the open bathroom door. In any case, Ellie grabbing that knob feels unexpected. What’s going on in that moment is a genius sleight of hand: the edge of the cabinet door is emerging as the camera is pulling away from the blue screen. It’s a reveal of a second shot that never feels like a reveal of a second shot.

As the camera keeps zooming out, we find ourselves behind Ellie, whose hand emerges from the right to open the cabinet and grab the pills. She exits the frame, and the cabinet door swings shut, revealing a “reflection” of a photograph elsewhere in the bathroom. Keep in mind: this is a fake mirror. So the “reflected” shot with the photograph isn’t really there. Neither are the finger smudges or the distortion created by the mirror’s bevilled edge as the cabinet swings open and shut. Another cool detail: if you keep your eyes on the “reflection” as Shot-B-Ellie opens the cabinet, you can see that the camera operator from Shot A panned away to mimic the movement of the hinged cabinet door.

On a technical level, Shots A and B never “turn from one shot into the other.” But, narratively, the two shots “trade-off” their hold on what the audience considers reality vs. reflection when Ellie reaches the mirror. As Ellie reaches out for the handle, you can tell that the distance between her “real hand” (in Shot B) and her “reflected hand” (in Shot A) doesn’t quite look right. Some of the fingers were even reconstructed digitally, according to Duggal. In any case, most folks aren’t looking at Jena Malone’s hand placement during this shot, let alone her fingers. They’re trying to collect their jaws up off the floor because they’ve just witnessed a camera pass backward through a mirror.

Compositing— the technique of combining different shots and elements into one image—is the backbone of visual effects. The earliest incarnations of compositing drew from still-frame techniques, namely: multiple exposures. Georges Méliès’ and F.W. Murnau’s work contains some of the most recognizable examples of silent-era matte composites, which involved covering up part of a shot during its initial exposure. Later, that covered section could be exposed again to capture a different subject.

In 1916, Murnau’s cinematographer of choice, Frank D. Williams, created the first traveling mattes using a black screen process. A traveling matte is an opaque matte that matches the movements of a subject so that they can be superimposed over a separately filmed background without appearing semi-transparent. In the 1930s, the effect improved with the Dunning Process. Dunning’s method shot foreground subjects with a powerful yellow light against a strongly lit blue screen, using panchromatic film stock. The captured footage could then be split into two different film elements: the foreground element and the traveling matte.

In 1940, special effects artist Larry Butler created a way of compositing color film sequences. Using the three-strip technicolor process, he shot his subjects against a plain blue background. The special effects department would then manipulate that sequence to produce a black-and-white traveling matte using a technique similar to the Williams process. This matte would then be passed through an optical printer to combine all the layers into one single element with a composited image. The technique won Butler an Academy award in 1940. The sodium vapor process, which used a yellow screen and a beam-splitting prism, was famously used by Disney to combine live-action and animated sequences. The process was technically superior, but it was so ridiculously expensive that only one sodium vapor camera was ever produced.

The basics of Butler’s technique would remain essentially unaltered until the 1970s when Star Wars upped the stakes for blue screen traveling mattes with computer-controlled cameras. If you want to learn more about the rise of the blue screen in the 80s, this video from ILM’s Mark Vargo is a great place to start.

Finally, just in terms of trippy cinematic mirror effects, I’d be remiss not to mention the watery mirror of Jean Cocteau’s Orpheus (1950). In the film, Orpheus (Jean Marais) travels between the world of the living and the dead through a magic mirror, which ripples like water as he passes through it. The mirror was shot from above and was, in fact, a vat of liquid mercury. Marais had to wear protective gloves in order to interact with the “mirror.”

Let’s be thankful for blue screens: a way of passing through mirrors that doesn’t involve interacting with a toxic liquid.