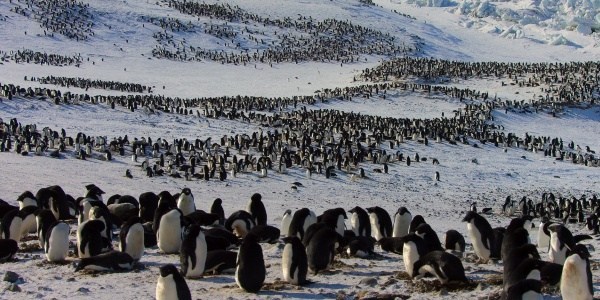 Katabatic winds scream across Cape Crozier, a snow-swept chunk of ice and rock at the edge of Antarctica. Nobody lives there. Nobody, that is, except for over 270,000 Adélie penguins. They’re klutzy, squawking, 2-foot-tall animals that waddle purposefully across the antarctic plains, biting and flapping and tripping over one another like little Monsieur Hulots. And they’re the subject of two Disneynature documentaries: 2019’s Penguins and its superior making-of doc, 2020’s Penguins: Life on the Edge.

DisneyNature has consistently produced some of the most stunning wildlife documentaries of the last decade. But even more breathtaking are their glimpses behind the scenes. While Penguins, narrated by Ed Helms and definitively aimed at children, gleefully explores the trials and tribulations of the Adélies, its making-of piece, Life on the Edge, is a testament to the filmmakers who braved some of the harshest conditions on Earth to capture that story.

To make Penguins, multiple camera crews filmed in Antarctica from early spring to late summer, when the Adélies return from the sea to build their nests, find mates and raise hatchlings. Cape Crozier, the most hostile and isolated filming location the crews worked at, had a rotating door of two-person teams, who would each spend several months with the Adélie colony.

Disneynature often frames its narratives as straightforward, palatable underdog stories (or under-penguin stories *jumps out of window*). In Penguins, the subject is a little beta schmuck male Adélie, Steve, who gets lost behind his waddle (that’s what you call a group of penguins on land; isn’t it adorable?). He hits all the marks of a clumsy male underdog protagonist: He meets-cute with an unlikely lady, gets separated from his penguin pals under the ice, nearly gets eaten by orcas, wanders mistakenly into an elephant seal colony, and then eventually leads his babies to the ocean.

Life on the Edge, thankfully, knows that all of that is bullshit. “Steve,” his mate, and his children are amalgamations of probably dozens of Adélie penguins the filmmakers followed in their months in the arctic. Episodes like the Adélie lost among the emperor penguins, the babies rushing their father for food, and the encounter with the orcas were all recorded individually, months apart, then lacquered over in post-production with breezy narration telling us that these separate incidents are all part of “Steve’s” adventurous life.

The crew even filmed at three separate penguin colonies, presented in the film as one united whole. These are Cape Crozier, the French research base Dumont D’Urville Station, and Avian Island, the latter of which was used for the film’s climax, in which “Steve” and his chicks evade leopard seals prowling beneath the sea ice.

The Penguin And The Frenchman

Rather than the penguins, Life on the Edge’s emphasis is on the hardships faced by the filmmakers. Directors Alastair Fothergill and Jeff Wilson, who also helmed Penguins, are there too — Wilson leads the Crozier crew in early spring, while Fothergill heads up the aerial team in mid-summer — but most of the film is about their cinematographers, all innovative, dedicated artists doing A-tier work in the freezing, windy cold.

Where the original doc studies the penguins as though they’re people, making clear anthropomorphic connections with quirky music cues, vocalizations, and cheeky narration, Life on the Edge is so spectacular because it treats the Adélies as animals. Dirty, curious, wonderful animals, that shit all over the equipment and on cinematographer Sophie Darlington. The drama comes from how difficult the penguins are to work with and how the crews triumph despite that.

In one scene, Rolf Steinmann and Max Hug-Williams fashion a rig that holds the camera at penguin height and stabilizes it against the heavy winds, which is pretty genius. Another finds the team setting up a zipline for the camera so it can take smooth tracking shots of the penguins without the wobble you get from strapping a rig to someone’s chest.

Somehow, Didier Noirot, the project’s underwater photographer, encounters none of these problems and even manages to find a star among the Adélies: a little penguin sitting outside a hole in the ice, waiting to be filmed. Noirot’s something of an underwater filming legend, having worked with Jacques Cousteau and shot underwater footage for several David Attenborough docs for the BBC, so seeing him get all giddy about working with a 2-foot-tall bird is one of the many joys Life on the Edge offers. “This is our actor!” Noirot tells us, in French. “This is the star of the film!”

Adélie penguins, when they enter the water, fall rather than jump — exactly like Taron Egerton in Rocketman when his Elton John falls chest-first, drugged-out, into the swimming pool. (Sometimes, they do this when there’s hardly any water to fall into… watching penguins drop belly-first into the mud with a startled squawk never gets old.) So Noirot’s penguin falls in, like Elton John, and swims off, leaving the crew above the ice. “Now our movie star needs to come back,” one of the cameramen muses.

Noirot’s staying at the French research base, DDU. The helicopter bringing him in also brings the first mail and fresh food in months, and in the film’s funniest scene, one of the researchers declares, “Ladies and gentlemen, this is a historic day! We’re celebrating the return of fresh tomatoes and green salad!” and the French crew all eat lettuce and tomatoes with their hands, opera music blaring on the soundtrack.

Where Noirot finds a compliant penguin, easy to photograph, more often than not, the Adélies’ curiosity ruins takes — there’s a good bit where a couple of the guys trample a camera. The relatively low-stakes drama of whether the crew will get their shot or not winds up being more compelling than the artificial three-act structure its parent doc, Penguins, laboriously invents.

Early summer brings cinematographers Matthew Aeberhard and Julie Moniere to Crozier — their task, to get a shot of a baby penguin hatching. But a summer storm blows through and lasts days, and the cinematographers get so pissed that they’re trapped inside their tents by 200 mph winds.

They stay at Crozier through Christmas (the warmest time of year in Antarctica). Moniere checks in with the radio operator and asks if they have any messages for her and Aeberhard. She gets a Merry Christmas message, but it turns out to be a mistake, meant for another site… she and Matt don’t actually have any messages, the operator says regretfully. It’s utterly devastating.

Especially because we cut immediately to DDU, where Didier is sitting on Santa’s lap as the French researchers, probably drunk, cheer uproariously. Where Moniere and Aeberhard are on their own, with just a solitary bottle of expensive bad wine, a skillet of meat and veggies, and a tiny equipment tent to celebrate in, the folks at DDU dance, sing, and feast on prawns, oysters, and more wine than they can drink in one night.

I studied film production in college, and seeing the crew of Penguins filming mostly novel footage in such a beautiful, thankless environment is as much catnip for me as I’m sure that, say, The Devil Wears Prada is for advertising majors and fashion design students. It’s amazing to see the intense work that went into a film where Ed Helms gets to make poop jokes.

The narrator here, Blair Underwood, doesn’t crack as many jokes as Helms, but the voiceover for Life on the Edge is surprisingly robust. You learn more about penguins from this making-of doc than you can from the actual film.

Of course, both films look great, too. The DisneyNature docs are all formally excellent, showcasing some of the most up-close, high-resolution wildlife photography this side of Planet Earth. Every film in the DisneyNature brand remains accessible, engaging, and family-friendly, regardless of which corner of the planet the crew has set up shop in.

But that accessibility and family-friendly nature is often their greatest flaw. Being produced for and marketed toward a young audience pigeonholes the docs into being light on information and heavy on pathos, usually resulting in a deluge of manufactured story tropes, the wholesale invention of characters and storylines through editing, and an overwhelming emphasis on Western narratology that often results in thematic focuses like the nuclear family, the value of labor, and the importance of generational cycles of child-rearing, as well as economical, satisfying storytelling and endings that wrap up the adventures in cute little bows.

Where Penguins stresses the extremity of its polar environment, for example, in Life on the Edge, one of the biggest obstacles is how the penguins actually don’t seem to mind the cold. They can build nests, sit on eggs, and raise hatchlings regardless.

Life on the Edge still has a degree of artifice, though — the crew conveniently doesn’t focus on the incredible phenomenon of penguin prostitution among Adélies, for example, whereby the female penguins engage in transactional sex with single males to get rocks for their nests. Equally scandalously, there’s very little talk of climate change, which poses a severe threat to Adélie life.

Present as well is the artifice of documentary filmmaking itself, that feeling that this candid behind-the-scenes peek is really more controlled than it lets on. Who, after all, is filming the filmmakers? Who records the helicopter as it arrives, and then again as it leaves? You can feel, as well, in the scenes when Moniere and Aeberhard are deeply frustrated, that they’re silently calculating how to express themselves without swearing.

Having seen it twice, Penguins: Life on the Edge continues to be remarkable. The whack-a-mole finale, in which the crew frantically films leopard seals as they hunt a group of penguins, stealthily popping up through the ice, remains one of the tensest, compelling, and unexpectedly ruthless sequences I’ve ever seen in a nature doc. I’m more interested, too, in how DisneyNature’s team schedules, storyboards, and writes the scripts, as we only get to see the filming part of the job.

The crew of Penguins not only withstood one of the most extreme environments on the planet, but it filmed at locations like Avian Island, where no film crew has ever been before. The team got enough material to fill two documentaries, each good in its own right. Life on the Edge does justice to the normally unsung labor Fothergill, Wilson, and the cinematographers went through to get their shots, be it wrangling penguins or diving into the glacial waters. And seeing the cameraman suspended in the sea beneath a massive iceberg, the freezing, formless blue stretching into the deep black under him, I wanted to see more stories like Life on the Edge, of filmmakers, risking life and limb to bring us footage of wonders yet unseen, or at least of a penguin flopping belly-first into some mud.

What did you think of Penguins: Life on the Edge, or of its big brother documentary, Penguins? Comment below and let us know.

Penguins: Life on the Edge is streaming now on Disney+.

Watch Penguins: Life on the Edge