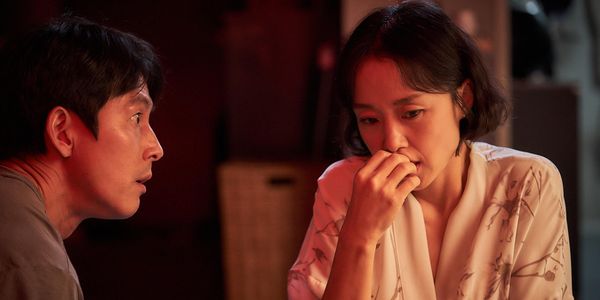 Korean Cinema is having its moment. The industry has been pumping out fantastic movies for more than 20 years now, but since Parasite won Best Picture at the Oscars, the American film community has finally started to embrace Korea’s output of interesting mid-budget entertainers. I’ve seen a good number of Korean films over the past decade and some of them, like Bong Joon-ho’s classics Memories of Murder (2003), Park Chan-wook’s Oldboy (2003), Lee Chang-dong’s Poetry (2010), and Hong Sang-soo’s Grass (2019), deserve to be canonized. Others like Kim Seong-hun‘s A Hard Day (2014) are brilliant genre films.

Lee Chang-dong‘s Burning (2018) is a stunning slow-burn drama. Some of course, like Yoon Je-kyoon‘s Ode To My Father (2014), are quite terrible. But as with any industry, most of the movies being doled out are middling sort-of-good movies that are suitable for one-time watches.

This is where Beasts Clawing at Straws falls. Like Lee Soo-yeon‘s Bluebeard (2017), another K-Thriller film with clever humor and ambitious twists that exceed the filmmaker’s storytelling grasp, Kim Yong-hoon’s movie starts with a bang and leaves with a whimper. Using a hyperlink structure with storylines weaving in and out of each others’ periphery, this is a bold debut for a filmmaker to have. The characters are: Joong-man (Bae Seong-woo) is a clerk at a men’s sauna who discovers a Louis Vuitton bag filled with money, Mi-ran (Shin Hyun-bin), an abused escort who conspires to kill her husband with the help of a younger lover of hers, Tae-young (Jung Woo-sung) a customs officer who runs (consistently failed) schemes for a mob-boss who he is in debt to, and Yeon-hee (Jeon Do-yeon), a rich madam who runs a ‘hostess bar’ that serves as a front for the mob.

Kim’s film mixes comedic hijinks, satire, and very off-putting violence in a way that has become a trademark of 21st-century Korean cinema. Unfortunately, the tonal shifts between bumbling humor and one character sawing off the leg of another in this movie don’t quite do it for me. While all of the characters are compelling in their own rights, the trajectory of them tumbling deeper into the terrible situations they have created for themselves is not created with much feeling. There is a sense of contempt that Kim has for his characters, allowing them to behave badly to each other and to themselves, and consistently punishing them in increasingly cruel ways. This can work if they are all culpable or immoral people, but some of them are simpletons locked into the wrong situation.

Alejandro Gonzales Iñárritu, like Kim Yong-hoon, also began his career with a hyperlink film, Amores Perros. But that one played things muted and centered on character drama rather than stylized plot twists. Yong-hoon tries to weave an impressive story that gets us invested in all the absurd shifts it makes. By nature of a hyperlink story, the individual threads at the beginning seem interesting because they are the start to a new character’s journey, akin to how a writer may be excited writing the first paragraph of a novel or script.

Once the film hits its second act, however, things start to grind to a halt in some places, and Yong-hoon pushes the narrative by force through unpalatable plot swerves. Everyone starts dying, or inadvertently killing someone else but instead of being shocking or compelling, the narrative simply loses steam. It’s hard to tie the strands of a narrative together when they get too long and unwieldy. The unfortunate thing about Beasts Clawing at Straws is that it tries to force entertainment through shock value instead of investing in the characters. By the end, all that’s left is ashes and blood, and an emotionless void. Why did these characters even deserve a movie?