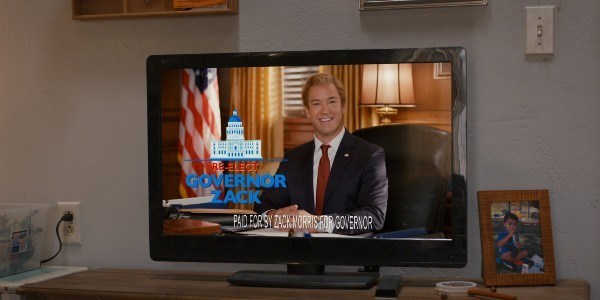 This newest incarnation of Saved by the Bell developed by Tracey Wigfield–creator of the undervalued comedy Great News–expertly blends its nostalgia with quick-paced comedy and an update of the original show for a modern teen audience.

Saved by the Bell is a heartfelt, satirical, and hilarious update of a classic, and often-revisited series. This reimagining works well because all of its influences are perfectly mixed together to create something new and memorable.

The primary narrative of this version of Saved by the Bell develops from a wonderfully satirical campaign ad showing Zack Morris (Mark Paul Gosselaar) running for re-election as governor–a career move that first started to get out of paying a $75 parking ticket–and the direct impact of his decision to cut 10 billion in education costs from the budget by googling what they did last year and copying it. This budget plan caused school closings and concludes with the decision for the students of the rundown Douglas High to be sent to Bayside.

This opening showcases the satirical aspects of the series and directly connects them to the nostalgia at the heart of the reboot. By establishing this tone early on, the series quickly introduces its new characters and throws students from two vastly different worlds into the same classrooms.

In addition to blending together students from different walks of life in increasingly hilarious ways, Saved by the Bell also balances its tones of satire, nostalgia, and modern teen show with expert precision. There is no single aspect of the reboot which takes over completely. We experience well-developed moments featuring returning cast members, jokes poking at the original series, and plotlines aimed at a modern audience, and these all work together to create a unique experience with a never-ending stream of memorable comedic moments.

Saved by the Bell does a great job exploring how challenging a move like this can be for students, especially when their previous school shut down in the middle of class president election speeches. This is where we are introduced to the Douglas High students, most notably Daisy Jiménez (Haskiri Velazquez), Aisha Garcia (Alycia Pascual-Pena), and Davante Young (Dexter Darden).  By introducing these characters in an environment completely removed from the absurdly neon, nostalgic, and white atmosphere of Bayside.

Once inside Bayside, more new characters are introduced and given their own personalities that showcase the differences the show wishes to explore between the two schools and the income-level of their respective communities. In his first scene, we learn that Zack Morris’s son Mac (Mitchel Hoog) has flooded the gym. As the Bayside introductions continue, we are introduced to Lexi (Josie Totah), an openly transgender student with her own reality show “Becoming Lexi: I Am Me”. We also meet Jessie Spano’s quintessential himbo son Jamie (Belmont Cameli), who is surprised when Daisy points out he’s been carrying a football with him all day.

This reimagining of the classic series makes sure to blend its absurdity with realistic and important discussions. Giving Daisy the power to time out her interactions with a record scratch–something Zack does in the original series–showcases how important it is that this version of the series reflects the diversity of real-life and the struggles students face when they are not born into success.

In a very affecting moment, Daisy uses her powers to try to stop herself from crying when Mac and Lexi do not understand how much she worked to try to achieve even a semblance of what they can get so easily. The series does a wonderful job of giving each character moments to show growth, and this continues throughout the season. By the end of the season, the Douglas kids are accepted and are slowly making a difference in the hearts of their once self-involved ‘Bayside Buddies’.

Humor with Heart and Spice

The humor of Saved by the Bell is rapid-fire and is not concerned with going too far for the style of their show. This use of comedy feels similar to Tracey Wigfield’s past work on 30 Rock and in her show Great News. Jokes come quick and never feel watered down to fit into the Saved by the Bell and modern teen show demographic.

There is humor in every inch of every frame, from posters on the walls to character names. In the first episode, Mac and Lexi’s campaign posters reflect exactly how little they care about the actual position as class president. In the second episode, Aisha and Daisy meet some overly concerned mothers of the school, one of which is named Joyce Whitelady, who as Daisy expects, will “try to bond with me by saying something she heard a black guy say on Project Runway.”

The series incorporates jokes about current issues and the self-involved nature of the Bayside students with nods to the original series. During a meeting with concerned parents, Jessie Spano (Elizabeth Berkley) is introduced as the counselor and author of the self-help book “I’m So Excited. I’m So Scared…of Being a Parent” as a fun reference to her caffeine pill storyline in the original show.

When Daisy tells Aisha she does not have the Bayside Student App, she does so by pulling out her comically large cellphone, a joke which works on its own, but has that air of nostalgia because it shows that the appearance of a phone identical to Zack’s in the original show has the opposite impact of economic class level in this 2020 update.

At a party, A.C. Slater (Mario Lopez), who is now the football coach at Bayside, recreates dances from the original series, most notably his dance from the classic episode House Party, wearing an outfit very reminiscent of the one in that 1990 episode.

As the first season of the Saved by the Bell reimagining progresses, friendships develop between the Douglas and Bayside kids, more appearances from original Saved by the Bell characters happen, and constant entertaining comedic moments are peppered throughout every episode. This reboot succeeds in perfectly capturing the nostalgia for the original, with jokes at its expense, while creating a new class that we want to get to know better.

Saved by the Bell (2020) Season One is currently streaming on Peacock and has been renewed for a second season.

Are you interested in watching this reimagining of Saved by the Bell? Which other shows would you like to see brought back for new generations? Share your thoughts in the comments.