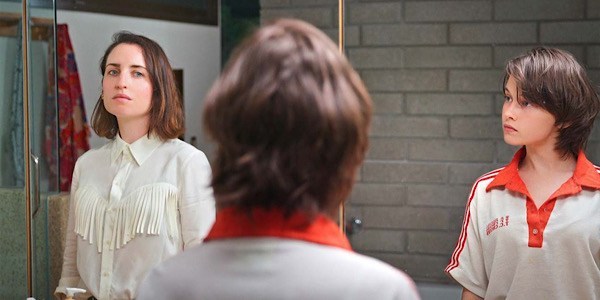 With my second report at this year’s virtual Sundance Film Festival, I found myself even more impressed than I had been so far. All three of the films resonated in different ways, generally combining awe, curiosity, and a sense of fulfillment. As always, thank you, creators and festival runners, for instilling the power of film.

An asteroid will hit the earth and destroy all mankind, what do you do with your last day? Our answers would probably vary, and while this seems a little Seeking a Friend for the End of the World, it’s not. Other than that big blaring consistency, Liza (Zoe Lister-Jones) is truly seeking her own peace and not searching for it in another. Written and directed by married co-writing/directing duo: Zoe Lister-Jones and Daryl Wein, this was the perfect film to start my day with. It gave me a sense of beauty, tickled my funny bone, while also remaining ultimately meaningful in a time where we all want is to grasp that.

I will say, her initial plan with her metaphysical younger self (Cailee Spaeny) who takes this journey with her, to make amends with family and friends, tell the man she loves Nate (Logan Marshall-Green) that she does and then attend an end of the world party (with copious drugs) doesn’t seem like a bad one. Given what she’s facing at day’s close.

A lot of the movie follows her walking around, running into old friends (with a variety of fun cameos, including a hilarious first Nick Kroll one) family, and her ex. She also meets some strangers that in their own way leave their imprint. While the film starts on a funnier note it soon shifts (rightfully so as the clock strikes closer) and the dramatic elements arrive in a way that feels natural. In a lot of ways nothing is happening, and yet everything is. It’s not an enormous plot-driven story, it’s a character one, a form of reflection and humorous commentary. Zoe Lister-Jones delivers her quirky lines with such wit and ease that it makes it incredibly challenging not to love her here.

How it Ends is wonderfully random, genuinely funny, and yet beautifully poignant. A cathartic rumination on just what we want out of ourselves when the end finally comes.

When I caught the showing for the film I never expected to love it as much as I did. I’m still not entirely sure why I thought that way -maybe a safeguard of always hindering expectations- because it’s got all the main ingredients for a movie that seems inherently, well, me, and yet I was quite taken aback by how much I enjoyed this gothic period piece that featured an interesting take on the werewolf curse in Eight For Silver.

Written and directed by Sean Ellis, the movie begins in the future as a much older Boyd Holbrook is close to death. He passes on a container of silver to his adopted daughter, acknowledging the importance, and her knowledge of it. From there the story goes back 35 years prior.

In 19th century France, when a settlement under the thumb of Seamus Laurent (Alistair Petrie) decides to rid the land of gypsies, a curse is brought down on those responsible. Saying “rid” is putting this in the lightest sense imaginable. This isn’t a movie that shies away from gore or the sheer horror of what occurs next. There’s a brilliant shot (one of many terrific, elegant, cinematographic choices) from afar as they cause carnage on this innocent village. It’s a distant view, but yet it’s nearly suffocating, with its lasting impact. Afterward, they finish with such brutality that it had me finding myself saying out loud “holy hell.”

From there, things don’t go well, and without going through all the plot details, after some shared dreaming, and curious children, a werewolf-like creature is brought into the town, wreaking havoc. Boyd Holbrook is a pathologist who is then brought into town after a mysterious bite and the disappearance of those inflicted after, which screams strange.

This is a piece that is atmospheric and chilling in several of its narrative decisions and is performed fantastically. I’ve always thought of Boyd Holbrook to be a bit underrated, and he turns in another impressive performance. Kelly Reilly is also amazing as Seamus’s wife, Isabelle Laurent.

As said previously there’s a lot of gore, with such interestingly disturbing body horror too. There was one sequence that reminded me of John Carpenter‘s The Thing (one of my favorites… a compliment). Yes, there are a few pacing issues, it probably could have been a little shorter, but it was still a stellar take, with some necessary social class themes reminding us (even without mythical creatures) of the horror man can create.

Eight for Silver is truly unique, it excels in its eerie spin, breathing new- brilliantly deranged life into the subgenre.

Has there ever been a movie you were watching, early on, where you thought – this is either going to completely engulf me or entirely disappoint? Very early on in Mayday, primarily because of its lack of explanation and quick narrative speed (intentional), I had that thought. I was intrigued, so I was going to unravel this mystery regardless, but I was truly hoping for the former. Luckily, I was right.

That kind of split is part of what makes film, and by extension- criticism, so interesting. We watch these characters’ journeys, but then also take very different ones ourselves. Mayday absolutely took me on a journey; greatly capturing a lead character whose strength and vulnerability were both consistently on display.

Written and directed by Karen Cinorre, Mayday, after some initial incoherency, soars into ambitious territory. When we begin we meet Ana (Grace Van Patten) and despite a fast introduction of her sleeping in her car, going into work and then, taking her life, it’s still clear from this snapshot of the significant amount of pain that she’s in.

From there she travels to a different world or plane of existence (purgatory?) – as you will. While not defined, she wakes up on shore and is instantly scooped up by Marsha (Mia Goth) who, in quick- confusing ways, tells her they are in a war. She meets the other girls (Havana Rose Liu and Soko) too who she learns have all also taken their own lives, but have lost a lot of their memories. Despite her “death”, she’s still trying to maintain her integrity, her identity, while the other girls want her to murder and fight, she senses this isn’t the right way. They often call in the men, claiming a Mayday, a fresh take on the mythical “sirens,” eventually luring them in to their death after claiming to be damsels.

It’s smart, and a lot of the film feels very experimental, which I admire. It’s whimsical at times (an interesting musical/dance scene, playfulness between the women) and yet harsh and unsettling at others. It’s also visually beautiful, with gorgeous cinematography and musical composition, along with stars in Goth and Van Patten who never let up.

There are some issues with its direction at first, as well as its hiccups in editing, but none of that takes away from its eventual strength.

Mayday is a surreal fable that deals with heavy themes of gender and suicide. It’s truly captivating, a film that really had an effect on me. A visionary and impressive directorial debut from Karen Cinorre.