Welcome to One Perfect Monster — our 2021 One Perfect Shot bracket project. Stay tuned by bookmarking this page or follow along with #OnePerfectMonster on Twitter.

Last year, we explored the realm of perfect TV show bingeability with the One Perfect Binge bracket. And while it was fun to watch two shows about small-screen monsters like Walter White and Hannibal Lecter battle it out for the title, our 2021 bracket brings to the fore an even larger obsession, quite literally larger. This year, we’re looking to name cinema’s One Perfect Monster.

For the purposes of this discussion, we define “One Perfect Monster” as having the following qualities:

On this bracket, you will find that it was a great pleasure for us to assemble our 32 favorite massive movie monsters, each ready to compete for the title of One Perfect Monster. Voting will take place on the @OnePerfectShot Twitter account and begins March 1. The First Round will conclude on March 7. By the time we get to the release of Godzilla vs. Kong on March 31, we’ll be voting on the final matchup. Will it come down to Godzilla and Kong? Or will there be surprises along the way? There’s only one way to find out…

The One Perfect Monster Bracket 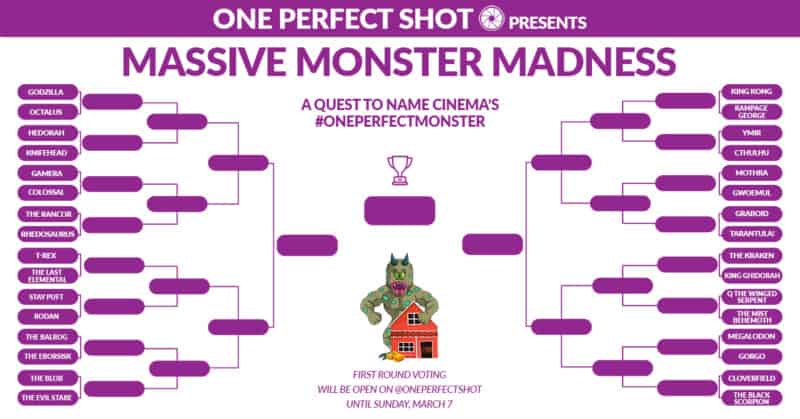 One Perfect Monster – First Round Matchups

Below you will find arguments for every monster in each of the 16 First Round matchups. Twitter polls will be added to this page as they go live.

Spoiler Warning: Even though all of these monsters appear in movies that are a year old or more, some of these descriptions and images might be considered spoilers. Please consider this your warning. 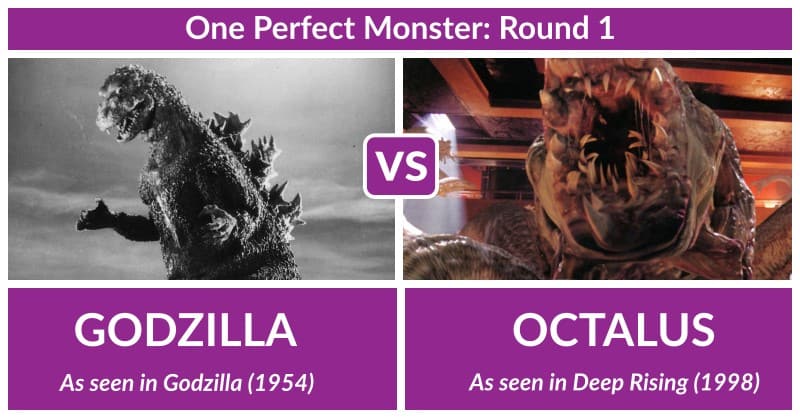 The case for Godzilla: Let’s be honest, this entire bracket is Godzilla vs. The Field. We’ve been told over and over again — since its massive frame first towered on the silver screen in 1954 — that this is the King of the Monsters. And we’re about to find out. Godzilla brings size, tenacity, and atomic breath to the table — plus more than six decades of experience stomping on building and punching other monsters. That’s an impressive resume, befitting some kind of King, but will it be enough to be King of This Bracket? We’ll know soon enough. (Neil Miller)

The case for Octalus: Tentacles! There’s nothing scarier than tentacles! Oh yeah? What about tentacles that come tipped with flesh-slurping mouths? Yeah, yeah, that’s scarier! Deep Rising spends most of its deliciously absurd runtime battling slippery, slithery, snake-like critters. Then, in its final moments, writer/director Stephen Sommers reveals these gnarly serpents to be the greedy appendages belonging to Octalus, a repulsive behemoth gorging on man-meat in the bowels of the film’s central luxury ocean liner. Monster movies rarely up the ante on their big bad horror as satisfying as Deep Rising. The film is often cheeZy but always gross, and when its gluttonous host finally bursts, there’s an extra surprise treat waiting to send its audience off howling for more. There’s always a bigger fish… or Octalus. (Brad Gullickson) 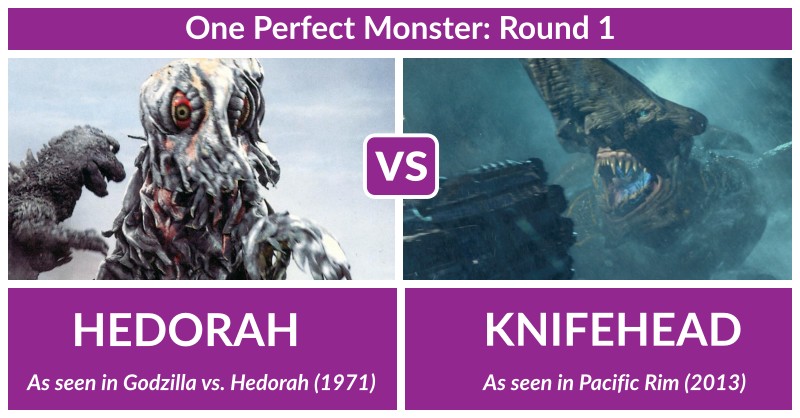 The case for Hedorah: Hedorah from Godzilla vs. Hedorah (1971) is a monster with a message. This monster, made up of pollution and chemical ooze, is the embodiment of Japan’s destruction of the environment. Hedorah consumes trash to evolve through its four forms, one of which involves the creature becoming an organic fly saucer who gases Tokyo. Godzilla may be spreading radiation in his path, but Hedorah has a much wider sphere of influence with its ability for horrific air pollution. This literal trash monster is a walking natural disaster and its acidic attacks are no match for even the thickest skin. (Mary Beth McAndrews)

The case for Knifehead: Okay, I don’t even know if I have to write a paragraph for this one. Knifehead? Could there be a more terrifying name for a monster than that? Knifehead made a name for himself in Pacific Rim (2013), where fights heroically in the Kaiju War against the giant robots called the Jaegers. And, between Knifehead’s head, which is shaped like – surprise, surprise – a knife, its rock-hard armor, and the powerful blow-hole on top of its head, it’s pretty hard not to cower in terror just imagining this guy emerging out of the water. Not only does Knifehead have a razor-sharp… head… but he can also outwit pretty much any of his enemies. A mix of crazy weapon-like features and a high IQ? I wouldn’t wanna get in Knifehead’s way. (Aurora Amidon) 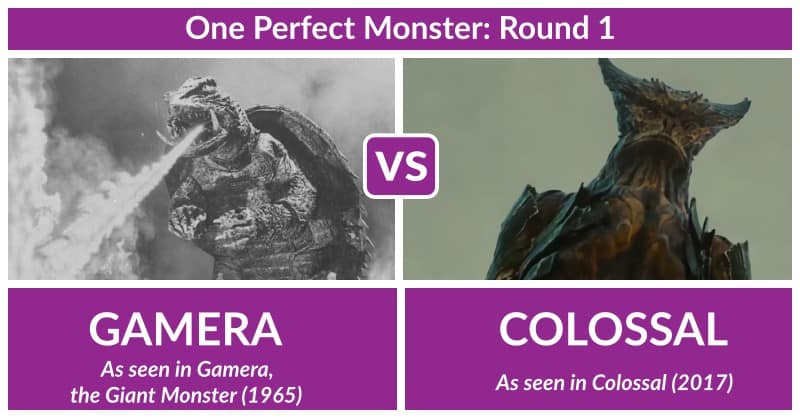 The case for Gamera: Could the One Perfect Monster be a giant turtle? I think it’s possible. Especially given the absolutely bonkers nature of Gamera’s story. From the troubled production of its debut film to the part of said film’s story where Japanese scientists try to lure the monster into a rocket and shoot it to Mars, Gamera doesn’t do anything the way you might expect. It’s a giant prehistoric turtle with tusks that was awakened by (you guessed it!) a nuclear explosion. It can also retract its limbs and head into its body and then spin around in its shell and fly like a flying saucer. So as long as no one tries to send it to Mars, I think Gamera has a fighting chance. (Neil Miller)

The case for Colossal: The best monsters typically have more behind their motivation or existence than a mere desire to rampage and destroy (although both are worthy pursuits for beasts), but few have the depth of Colossal’s giant threat. Without giving too much away, there are metaphorical shenanigans afoot here as an enormous creature tears its way through Seoul leaving nothing but carnage and death in its wake. We’re all monsters, though, each of us capable of causing immense pain without realizing the reach we have when it comes to the damage and suffering we can inflict on others. Does that realization make the monster more or less horrifying? Well, that really depends on the monster’s next step. (Rob Hunter) 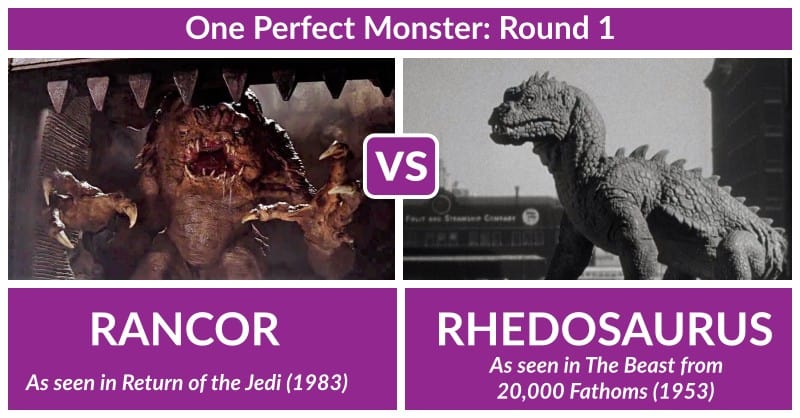 The case for Rancor: The Rancor was originally imagined as an homage to Godzilla. George Lucas desperately wanted a man in a suit to bring the pain to Luke Skywalker, but the elaborate and incredibly expensive costume failed to elicit reverence or terror. Master monster maker Phil Tippett eventually went to work building the wire-rod frame puppet he initially envisioned. The result was an astonishingly vicious beast and the logical extension of everything Ray Harryhausen invented. In reality, the critter was only 18 inches tall, but the Rancor will forever tower in our imagination. Despite his short stature and runtime, the meaty mass looms large in Star Wars. It’s the kind of design you immediately want molded into plastic and dropped in your toy chest. In our childhood bedrooms, he ruled in ways that Jabba never allowed. (Brad Gullickson)

The case for Rhedosaurus: Just as we humans have monsters we hope aren’t lurking in the shadows around us, so too must Godzilla be wary of finding Rhedosaurus around some dark corner. This nuclear-activated dinosaur, created with the stop-motion effects of Ray Harryhausen for the 1953 film The Beast From 20,000 Fathoms, is said to be a direct inspiration for Godzilla, who debuted on-screen a year later. But unlike Godzilla, this monster just wanted to wake up from its 65-million-year nap and go to Coney Island. Come to think of it, Godzilla and the Wonder Wheel should be worried. (Neil Miller)

More on the next page…