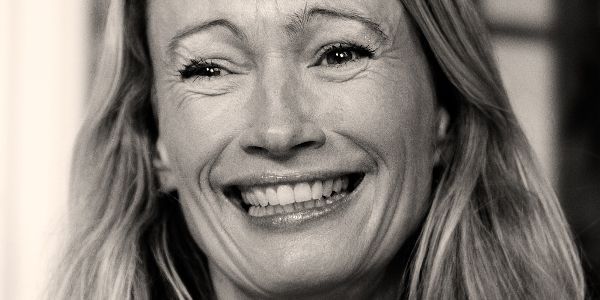 Generally, Blue Ruby is precise, clean, and clearly well-thought-out on a technical level, while professing it’s love for comedy-of-error films of the 20th century; it reminds us of modern resemblances that look back on the history of cinema; Mank (2020) and The Lighthouse (2019), immersing us with its sound, music, light and time-relevant performances. All hallmarks of a capable ensemble behind and in front of the camera.

Typically, many of these positives accentuate the film’s few negatives. For example, though the dialogue is performed naturally, well, and believably, it fails to hit the mark in terms of emotional beats and essential plot points. Therefore, the first five minutes of the twelve-minute running time glide past the viewer without delineating much more information than the opening title card. While it keeps pace, it doesn’t stick emotionally or informationally. A problem in which the film and its plot are deeply rooted.
Four decades of marriage equals Ruby, thirty; Pearl, and so on. A fairly sweet and small nugget of information. But if not known, renders much of the film a mystery due to its lack of on-the-nose expositional dialogue but primarily toughened by a shortage of genuine intimacy between Andrew Foster and Jo Ball‘s couple, who decidedly, don’t have any interactions that resemble more than two good-friends who’ve known each other a long time. Especially none that would suggest that their relationship was or is a romantic one. Obvious exposition is often excused or underestimated by swiss-army filmmakers, it’s implied that their gathering in Paris is a ‘coincidence’ – an odd piece of information to share, why would it be a coincidence? An interesting question, with no answer, as it’s never referred to again.

A Game of Tones

It’s Sarah Bauer‘s Clem who shines and enlightens Blue Ruby, her expressions rendered perfectly in black and white, sweeping the audience away and bringing us closer to the film’s intention. Her presence longs to be protagonistic but simply isn’t; Sarah only appears in short-lived bursts. Something about Clem’s innocent existence challenges the lack of sensitivity, love, and intimacy Blue Ruby and its lead couple sourly needs, as aforementioned, what’s positive can sometimes accentuate what’s missing. By the time the Blue Ruby closes, I recall that it was dubbed a comedy but to me, Blue Ruby primarily comes off as sombre and sorrowful. I felt sorry for the couple, sorry that Clem wasn’t treated all that nicely and I never stopped to think if any of it was funny. Not until the credits rolled at least.
Blue Ruby is charming, well-constructed, and rewards multiple viewings but I’m not sure if any of the emotional beats bear weight with audiences that aren’t like those represented in the film itself. Well-off, privileged, successful, and immune to intimate emotional drama or stakes. Basically, it’s pretty unrelatable. I find Blue Ruby to be a quaint stylised short which serves itself; as a fun bite in a catalogue of a filmmaker’s work but not as a stand-alone short film bestowed with a meaningful higher purpose or thought-provoking commentary. Which could either be good or bad, depending on what you expect from your cinematic snacks.