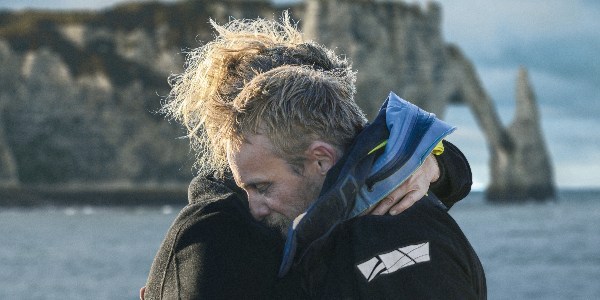 The thing that drifts away in Xavier Beauvois‘ ninth feature, Albatros, isn’t just its official English title, but also the film itself, especially in its final act. Set in a quiet, coastal town in Normandy, the film starts off as a low-key police procedural drama, with a sharp observation of everyday life and issues in Normandy lies at the heart of its story — you might say that it’s a police procedural by way of the Dardenne brothers. But when the movie makes a drastic turn nearing its second half, the intimate and quietness that’s built efficiently before is torn down in favor of a more generic meditation on guilt and grief.

Jérémie Renier plays Laurent, the police officer in question. When we first meet him, he’s in the middle of handling a suicide case that opens the film. It’s soon revealed that it’s actually not the first time suicide has happened in the town. In fact, as shown throughout the movie, the town is not exactly as peaceful as it looks on the outside. Underneath the quietness, therein lies so many issues that affect the community in one way or another.

As Laurent going about his days doing his duty as a police officer, the problems that are happening in the town start to unfold one by one: a drunk man making trouble at a local bar, a child molested by his father, just to name a few. But here’s where it gets interesting, instead of making the town’s problems purely fictional, Beauvois manages to draw from real issues that happen in France. And among them are the clash between firefighters and the police officers that escalated in a riot last year, and the EU restrictions that have made farmers’ life in France a little harder.

The film may not delve into it deeply, nor does it offer any solutions in regards to the real-life issues mentioned above, but it doesn’t necessarily need to. By simply depicting it with a high level of realism, the film has done a good enough job at tackling those issues — or at least to invite the audience to think about it. And Beauvois‘ intimate, non-flashy direction, as well as the screenplay he wrote with Marie-Julie Maille and Frédérique Moreau, add more realism to the movie.

Even more refreshing is the way the film portrays the main character. Where most police procedural dramas tend to give their leads gritty, often dark and complicated, backstories, Albatros chooses to focus solely on the work, dedication, and commitment of Laurent — at least in the excellent first half of the film. Yes, we get a glimpse into his personal life, but most of it is just a small part of the social issues that the film is exploring through him. It’s so unfortunate, then, that the second half of the film can’t maintain the level of brilliance that’s established in the first part.

Where The Film Starts to Sink

Instead of trying to find a way the maintain the subtlety during the first half, Albatros chooses to end the story on a generic note. This begins when we’re introduced to a character named Julien (Geoffroy Sery). A farmer struggling to accept the EU restrictions, Julien first appears to mostly become a proxy of the farmer issue that happens in France in which Beauvois is trying to address in the movie. But when he gets more unhinged nearing the second half of the movie, threatening Laurent and his partner that he will kill himself, he’s suddenly reduced merely as a plot device for Laurent during the second half of the film.

At this point, Albatros abruptly changes the focus from the town in which the story takes place and its social community issues to Laurent’s and his grief for not being able to save Julien. The problem is not that Lauren’t is an uninteresting character, or that Beauvois‘ approach at depicting Laurent’s grief is far from good, but it lies more in the sudden tonal shift that makes the film loses what makes it special in the first place. If the film wants to be a meditation on grief from the get-go, then everything that the first part of the movie has established seems useless, even though that’s the most interesting part of the story.

If there’s one saving grace that prevents the film from being totally unwatchable in the second half, it is Renier‘s performance. Both subtle and forceful, Renier, much like Beauvois‘ direction, never leans heavily on fleshiness. He manages to display the complicated emotions that Laurent is feeling in an understated way. And that’s what makes the film still grounded even though the final moment of the film is full of unnecessary dramatic moments.

Beautifully shot with intimate direction from Beauvois and a solid performance by Renier, Albatros tries to offer a refreshing and unglamorized take on police procedural canon but ultimately falls short when it decides to take the generic route at the second half of the movie. And as a result, the movie ends up as something that we’ve seen countless times before.

Albatros was screened at Berlinale Film Festival 2021 as a part of the main competition.