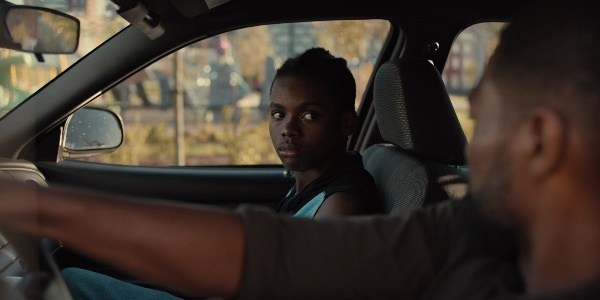 There’s a Sunday evening ritual in Baltimore, Maryland. Every summer, young riders blaze down the streets on dirt-bikes and four-wheelers, popping wheelies and tricks and waving to onlookers. The most badass riders can pull their bikes up completely straight, like the hands on a clock hitting midnight — these are the 12 O’Clock Boys. The group is the subject of Lotfy Nathan’s 2013 documentary, 12 O’Clock Boys, as well as the film it recently inspired, Charm City Kings, directed by Angel Manuel Soto, which premiered on HBO Max in 2020.

Mouse (Jahi Di’Allo Winston) is on the fringes of this biking culture, trying to break in. He and his two closest friends, Sweartagawd (Kezii Curtis) and Lamont (Donielle Tremaine Hansley), spend their summers palling around corner stores and parks, dreaming of one day having dirt-bikes of their own. Mouse’s 12 o’clock wheelie, on his cumbersome fire engine–red quad, isn’t too shabby, but it’s more like a 10 o’clock. He’s got room to grow.

The dirt-biking scene comes with its rules — dirt-biking and ATV-riding are illegal in the city, but police are not allowed to chase the riders, instead using helicopters to pursue them. But for Mouse, the most important rule is that he’s not allowed to attend the rides. His single mom, Teri (Teyonah Parris), wants him to stay home and focus on school. In Baltimore, where the biker scene is predominantly African Americans from low-income neighborhoods, Black children typically have only a handful of options, and Teri’s anxious for Mouse to follow his veterinary obsessions to a good career as a doctor.

A local police officer, Rivers (Will Catlett), is similarly inclined. He follows Mouse around like a guardian, making sure he stays out of trouble, and there’s an Into the Spider-Verse “oh yeah, some police officers run red lights… but not your dad” energy to these scenes, when Mouse insists on riding in the back seat because “snitches ride shotgun.”

Mouse is caught between father figures when he tries to get into the Midnight Clique, the criminal biker gang that’s Charm City Kings’ version of the 12 O’Clock Boys (though the Boys in the doc never committed any crimes but dirt-biking). The Clique is helmed by Blax (Meek Mill), fresh out of prison and seeking to lie low and reform his image. Blax sees something in Mouse — a young man who can be set on a straight path, or maybe a little of himself? Either way, Blax begins mentoring the kid, at first on building his own dirt-bike, and soon growing into the paternal role Mouse is missing.

Blax might be trying to go straight, but his right-hand man, Jamal (Chino), could use Mouse and his friends for some drug-running work. Mouse, who’s only 14 years old, has to decide what kind of man he wants to be, and how the rest of his life is gonna play out.

Looming over Mouse is Stro, his older brother, who was killed by police when he was only 17. Stro was in with the Clique, too, we learn. We see cell phone footage of his bike tricks, but Stro’s death happens before the story begins.

Intrinsically grappling with the conflict between Black communities and police, Mouse’s story is backlit by generations of real police violence against Black people. Freddie Gray died in 2015 when Mouse would have been a kid, and since then, there have been countless Black people killed by law enforcement in just that city alone. Mouse’s having to choose early whether to flirt with gang life for some much-needed quick cash or to invest in the future he doesn’t even know he’ll get to see substantiates the idea that Black children are never allowed to be children. They lose their innocence early, because the world they live in is racist, xenophobic, sexist, classist, and cruel, and they’re forced to grow up before they’re ready. Mouse’s innocence is shed long before we meet him in Charm City Kings — and now he wears T-shirts emblazoned with Stro’s name and face.

If the storyline feels familiar, it’s because most films depicting Black children in American cities travel down this road, depicting the conflict between the stereotypically sleek and sexy gang life and the hard-line future that requires good grades and attending the right schools. But familiarity doesn’t denote a lack of quality, and in Charm City Kings, Soto and his writers infuse Mouse’s journey with a passionate exploration of a niche biker culture that few people living outside of Baltimore are likely aware of.

In the cell phone footage, which opens the film, Stro’s played by Tyquan Ford. Ford’s better known as Pug, the kid whom 12 O’Clock Boys follow. Pug isn’t the only holdover from the documentary, either. Soto’s film shot on location in West Baltimore, so in addition to having local bikers fill out his ensemble, Soto enlists several of the real-life 12 O’Clock Boys to play members of the fictional Clique.

The film has a vibrant authenticity to it, and not just in the casting and locations — cinematographer Katelin Arizmendi gives Baltimore’s streets an oceanic sway and the conversations a realistic rhythm. And when we follow the Clique, engines rev, the riders lean back and lift, and we see them silhouetted against the sun, arms extended toward us, totally in the moment. Both Pug and Mouse talk about “going 12” like it’s the greatest sense of freedom you could achieve. It’s just you, the bike, and the road, and the only thing keeping you airborne is your innate talent and will to stay upright.

The more expressionistic elements of Charm City Kings recall Barry Jenkins’ Moonlight, a film that similarly blends realistic characters and dialogue with neon lighting, Nicholas Britell’s otherworldly music, and emotionally motivated camera movements and editing. That’s not accidental — Jenkins, alongside Kirk Sullivan and Chris Boyd, developed the story for Charm City Kings, while Sherman Payne, a TV writer known for his work on Shameless and Scream, wrote the script. The result is a story soaked with realism and augmented by stylistic flourishes and a poignant, subversive orchestral score from Alex Somers.

As Mouse, Winston aptly navigates the hot summer Baltimore afternoons, when he can show off with his friends and flirt with the new girl on the block, Nicki (Chandler DuPont), as well as the rough, fearful nights he spends running jobs for the Clique. Mill shines as his wary mentor, who’d rather stay in the garage with his pitbull than do gang business. The film’s at its best when its characters, especially Mouse and Blax, aren’t arguing and pointing guns at each other — when, like the Midnight Clique, they can just lean back and live.

Among a strong cast, it’s Hansley, playing Mouse’s wild-card friend Lamont, who commands the film. Lamont’s first scenes set up a comfortable, cool, slightly aggressive supporting character, but as Lamont gets deeper into the gang life and more ingrained with the Clique, the character meets a point of no return. The sudden shift, and Hansley’s firm, violent resolve, recall the frightening child-soldiers-in-training from 2019’s Monos. Lamont becomes a mirror for Mouse, a sign of what he could become if he abandoned Blax’s moral compass and gave himself fully to the Clique.

The Right Way To Do All The Wrong Stuff

Soto’s film, despite sharing so much DNA with Nathan’s great documentary, never winds up capturing the same pathos that 12 O’Clock Boys has in spades. The Clique’s members never have personalities beyond their dirt-bike tricks, and the film equates them with violent drug-dealers when, in real life, not all of Baltimore’s dirt-bikers run drugs, carry weapons, and threaten people. There’s an equivocation between dirt-bike culture and gang life that Charm City Kings makes abundantly clear yet which has little basis in reality, and which winds up reaffirming the real-life Baltimore police’s antipathy toward the bikers.

Similarly, class issues in Charm City Kings never crystallize into anything but the motivation for Mouse to join the gang. Pug’s neighborhood in 12 O’Clock Boys looks more run-down, overgrown, crowded, and lived-in, and that same vibe, be it the cool cinematography or the emphasis on Mouse’s friends rather than the environment they grew up in, cannot be found in Soto’s film. Where Pug’s mother is a former exotic dancer in the doc, in Charm City Kings, Teri’s a nurse. Where 12 O’Clock Boys embraces a definitive anti-police attitude in its latter half, Charm City Kings isn’t so certain.

Soto isn’t making a documentary. He is making a commercial film, produced by Will and Jada Pinkett Smith and starring Meek Mill. Nevertheless, this scene is rarely given attention in films of this caliber and this scale, and the resistance to faithfully capturing the realities of Baltimore bike culture occasionally undermines what would otherwise be a perfect story about Black life in Baltimore.

All manner of political questions needle the story — police brutality, the school-to-prison pipeline, toxic-masculine role models in Black communities, Baltimore’s history of all-white suburbs — but these themes are never let in. And instead of blaming institutions — the police, public housing, local government — Charm City Kings opts for a clearly delineated, simplistic heroes-and-villains tale, one in which the well-educated, veterinarian-to-be Mouse is a hero and the criminal biker gangs are villains. Like so many films about Black children coming of age before it, including, most prominently, 2018’s The Hate U Give, Charm City Kings pins all of its Black community’s myriad problems on a group of Black criminals rather than on the larger system that criminalizes them and forces them into these roles. Unlike The Hate U Give, Charm City Kings doesn’t end with a few arrests solving everyone’s problems, but the result is just as reductive.

Though it falls back on conservative ideas about Black life in Baltimore, Charm City Kings remains an expressionistic, powerful look at a neglected community that gets little attention on-screen. With its challenging performances, elaborate dirt-biking stunts, evocative cinematography, and unique setting for a coming-of-age narrative, it’s one of the great gems of 2020, unfortunately, buried by an unceremonious debut on a new streaming service, HBO Max, which clearly doesn’t know what to do with it.

Interestingly, most of the negative reactions to the film have come from white critics, and the same words pop up in their reviews: “predictable,” “formulaic,” “clichéd,” “familiar.” (Why have so many major outlets let their white critics cover this? And yes, that’s an invitation to harass me, a white critic, in the comments about this specific issue.) No, Soto’s film is nowhere near as emotionally mature or narratively daring as other Black-centric Bildungsromane like Moonlight — but why does there need to be one Black coming-of-age film? This isn’t a monolith. Why can’t there be dozens, hundreds, thousands of good stories about Black children growing up, chasing their dreams, and finding themselves? God knows we have a zillion stories about precocious suburban white kids doing the same stuff.

Despite its issues of representation, Charm City Kings is one of my favorite films of 2020. It extends so far beyond itself. It’s a rare film focused on African-American urban communities without falling back on neorealist poverty porn, instead of leveraging remarkable profundity and depth onto its main character, the ambitious Mouse, and onto the Black youth around him. It’s not just Mouse, though — it’s the whole energy Soto brings to the production that stays with you after it’s over. Between the thrill of those summer Sundays and the revving of the bike engines on those Baltimore backstreets, Charm City Kings finds a vibe that’s hard to shake.

What do you think of Charm City Kings? Let us know in the comments below.