Welcome to How’d They Do That? — a monthly column that unpacks moments of movie magic and celebrates the technical wizards who pulled them off. This entry explains how they shot the trippy “stargate” sequence at the end of 2001: A Space Odyssey.

It is difficult to speak about 2001: A Space Odyssey without careening into hyperbole. Stanley Kubrick‘s masterpiece is one of the most significant pieces of science fiction filmmaking. It towers over the genre like a jet-black monolith of influence, reputation, cult, and technical achievement.

In the film, humanity discovers a mysterious object buried on the moon. It’s sending signals to Jupiter. So the powers that be dispatch a crew of scientists on an ill-fated mission to investigate.

When released in 1968, it shattered all notions of what a science fiction film should and could look like. Indeed, the special effects in 2001 are just as astonishing today as they were back then. Achieved before sophisticated astrophotography, let alone CGI, Kubrick’s vision of the cosmos is unsettlingly convincing. And yet, for all its evocative hypotheticals, one of the most memorable set pieces in the film is infamously abstract.

In the film’s final act, only Dr. David Bowman (Keir Dullea) survives. The ship’s murderous AI has killed his crewmates. And now, with HAL 9000 destroyed, Bowman is truly alone. With no clear motive, he abandons his ship. Perhaps he spotted the enormous floating monolith orbiting Jupiter and went out to retrieve it. Or maybe, in a final act of violence, the ship’s AI sabotaged the vessel, rendering it inhospitable. Whatever his reasons, as Bowman ventures out into the unknown, the planets literally align. The starry void stretched out before the astonished doctor erupts into a kaleidoscope of color. He hurtles through the illuminated tunnel, warping through time and space itself. As the lights accelerate, Bowman’s stunned awe slips into an outright terror trip.

There is no real-world precedent for transit into another dimension. No fuzzy satellite pictures, no first-hand accounts from astronauts. As such, the stargate scene in 2001 is one of the most shocking, perplexing, and imaginative effects out there. So how on earth did they do it?

How’d they do that?

The stargate sequence was accomplished by mounting colored transparencies to the back of a mechanical rig. These illuminated patterns were visible through a narrow slit on the opposite side. While the camera moved towards the slit, the transparencies were passed in front of the light. Each dolly-in exposed half of a single frame. To complete the sequence, technicians had to repeat the process over and over again.

As described in Michael Benson’s Space Odyssey: Stanley Kubrick, Arthur C. Clarke, and the Making of a Masterpiece, the initial creative process that led to the stargate sequence was, in Christine Kubrick‘s words, “absolutely disgusting.” Which makes sense because how else do you describe an abandoned bra factory full of vats of moldy chemicals?

Grappling with the financial reality that 2001 had to go into production, Stanley Kubrick set out to complete a handful of preliminary test shots. Hiring a small VFX outfit called Effects-U-All, he rented an abandoned brassiere factory and turned it into a chemical lab. The team set up tanks of black ink and isoamyl acetate, a noxious World War II-era paint thinner infamous for smelling like bananas.

The effects team surrounded the tanks with high-intensity film lights, shooting in reverse and over-cranking the camera. Technicians dripped blobs of white paint and lacquer into the vats with toothpicks. Reacting with the thinner, the blobs produced shapes mimicking massive cosmic events: galactic tendrils, dying stars, and explosive nebulas. Unfortunately, the hot lights also had the unpleasant side effect of engendering bacterial growth. Kubrick shot some of these “drip” effects himself in a small darkroom in New York City. And some of that footage made it into the final stargate sequence.

Douglas Trumbull, then just twenty-three, was working under contract on pre-production research for the film. When the project moved to England, Trumbull cold-called Kubrick and asked if he could continue to work on the project. Kubrick hired Trumbull, who spent the next two-and-a-half years as one of the film’s four visual effects supervisors.

Kubrick’s vision for the stargate sequence vaguely amounted to wanting “the camera to go through something.” After seeing the tests of what Trumbull was planning to do (which can — maybe — be glimpsed in this trailer), Kubrick authorized Trumbull to move forward.

The stargate sequence was accomplished with the use of a rig that combined elements of stop-motion animation, a “slit-scan,” and the basic principles of streak photography.

Imagine taking a long-exposure photograph of a moving car at night. In the resulting image, headlights would appear as a long, illuminated bar. If, instead of a car, you were taking a long exposure of a vertical florescent tube, instead of a bright streak you would have a solid plane of light. Furthermore, if you were able to manipulate this tube, and turn it on and off, you could produce a photograph of a patterned plane of light. This is the basic idea behind the stargate effect.

As outlined in Trumbull’s own description, a long-exposure camera was mounted onto a track pointed directly towards a sheet masked in black with the exception of a thin slit. According to Cinefex magazine #85, the final build consisted of a six-foot-tall rotatable rectangle of sheet metal with a narrow opening cut into it. This sheet stood in front of a mechanized twelve-foot-long glass panel. This panel was backlit and affixed with various light-transmitting materials, namely transparencies and celluloid gels. The stargate artwork — as specified in Jerome Agel’s essential 1970 text The Making of Kubrick’s 2001— included high contrast negatives of everything from optical art paintings to architectural drawings to prints of electrical circuits.

“The room was painted totally black,” recalls Trumbull to Cinefex. “We erected our slit with a light source directly behind it. Then we built a track leading up to the slit and mounted a 65mm camera on it with a shutter that could stay open on one frame of film. To modulate the lighting coming through the slit, we used high-contrast negative transparencies that would slide behind the slit as the camera moved toward it.”

Trumbull continues: “By having this artwork move behind the slit, backlit, we were able to effectively turn light on and off. As we did that, we moved the camera along fourteen feet of track toward the slit — a full fourteen feet for each exposure. It took about forty-five seconds to a minute per exposure, and each frame was made up of two exposures.”

As Trumbull underlines, the camera was basically automatic. This included a brake system that kept the camera from bulldozing through the glass plane. A small accelerator motor gradually increased the speed of the stargate over the course of the sequence. “Oftentimes that camera would run for thirty-six hours continuously to shoot one take,” Trumbull recalls. “All together, we spent at least six months working on the slit-scan footage.”

In other words, Trumbull’s rig was turning a camera inside-out; externalizing the shutter as a physical slit in the real world. The effect was, as Trumbull himself put it in a lecture at the TIFF Bell Lightbox, “completely breaking the concept of what a camera is supposed to do.”

By tracking the camera towards the light source with a long exposure, the resulting streaks of light appear to move towards the camera from a single point. In short, this is the ultimate boon of slit-scan, as described by special photographic effects supervisor Con Pederson in a 1965 letter to Kubrick: that it can “simulate smooth, continuous motion variations from a single initial element, in two, or three-dimensional configurations.”

In that same letter, Pederson supposes that the technique might prove helpful with respect to sussing out the film’s ending. Indeed, the matter of how to introduce the stargate sequence was never quite clear. For example, in one scenario, Dave’s shuttle was going to pass through the monolith itself. In the end, projections of slit-scan footage that began total blackness combined with a starscape provided a solution. The transition “looked terrific” Trumbull recalls.

As the fine folks at Filmmaker IQ have remarked, the time and space-bending aspects of slit-scan photography poetically mirror the on-screen experience of Dr. Bowman as he hurtles through the stargate. And speaking of Bowman, it’s worth noting that the intercut stills of the surviving astronaut actually serve a formal purpose. Namely: to bridge the slit-scan footage’s flips from a vertical axis to a horizontal one.

Manipulated areal footage of Scotland and Monument Valley make up the oddly-colored landscapes that conclude the sequence. By randomly mixing up the three-strip technicolor process in an optical printer, the effects technicians were able to produce evocative color combinations.

Slit-scan photography has been around in some variation since the mid-1800s. The technique involves placing a sliding slit between the subject and the photographic plane. This gradually exposes the photographic medium as the slit travels from one side of the frame to the other. Trumbull placing the slit outside the camera in the 2001 stargate sequence was an innovation. In fact, in 2009, the Society of Camera Operators awarded Trumbull with a technical achievement specifically for his work on slit-scan motion picture photography.

One of the first uses of the slit-scan technique was in panoramic photography. The mid-19th century saw multiple cameras featuring “swing-lenses” which would gradually expose images onto rigid glass plates. However, as more flexible film stock became accessible, slit-scan’s popularity increased. This in turn evolved into strip photography, a process whereby the slit remained stationary as the film passed underneath. This was especially useful in determining winners at racetracks; a record of temporal relationships rather than spatial ones, like the bastard child of the panorama and the time-lapse.

Slit-scan photography found its way into motion picture film at the 1964 New York World’s Fair. To The Moon and Beyond was created by Graphic Films, a company run by former Disney animator Lester Novros that made technical movies for NASA. The special effects team’s convincing visuals impressed Kubrick, who contracted the Graphic Films team (including Trumbull) to work on preliminary concepts for 2001.

Trumbull cites avant-garde animator John Whitney as a direct inspiration for the 2001 stargate sequence. Readers may be familiar with Whitney’s work on the opening title sequence of Alfred Hitchock’s Vertigo, which happens to be one of the first instances of computer animation in a film (the computer in question was a World War II anti-aircraft targeting system). 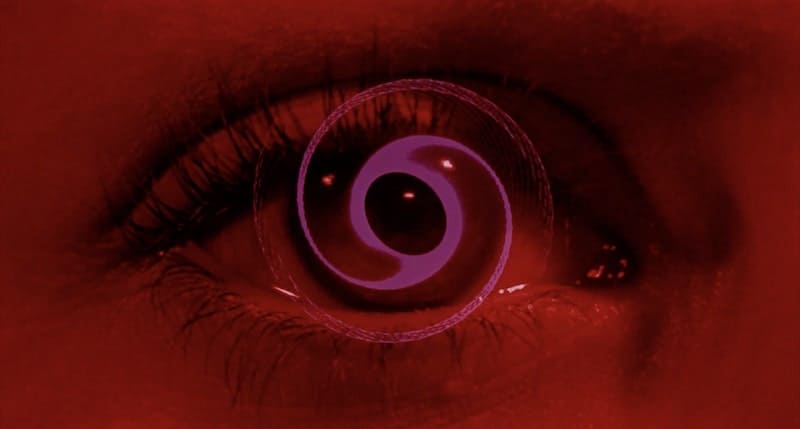 During the 1960s, Whitney experimented with long exposures of artwork set in motion by mechanized devices, (evocatively executed in 1961’s Catalog). Whitney’s experiments with mechanized long-exposure, combined with slit-scan, form the basis of Trumbull’s approach for the stargate effect in 2001.