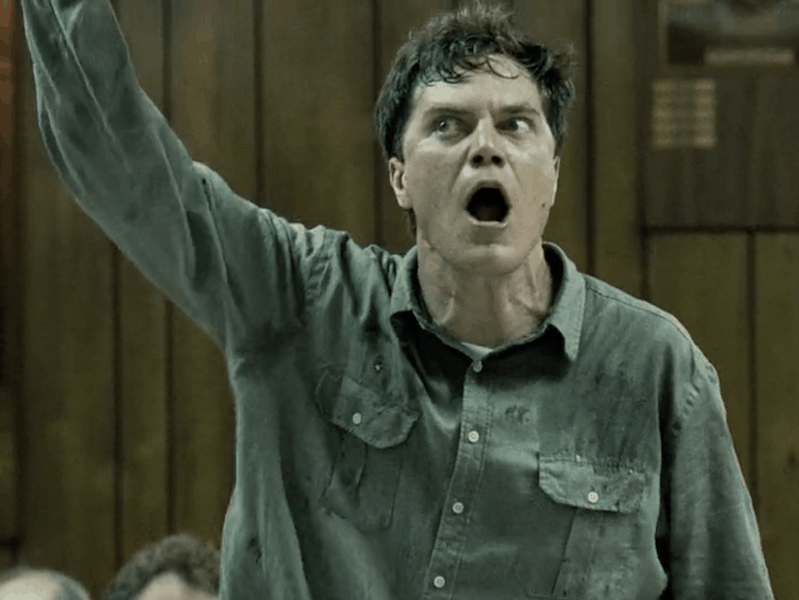 Acting is an art form, and behind every iconic character is an artist expressing themselves. Welcome to The Great Performances, a column exploring the art behind some of cinema’s best roles. This entry spotlights the performance given by Michael Shannon in Take Shelter.

There are few films I connect with more deeply on an emotional level than Take Shelter. A good deal of this has to do with Michael Shannon‘s impeccable starring performance in a film that he describes as “the most meaningful movie that I’ve made,” with “profound, personal resonance.”

Writer-director Jeff Nichols crafts an introspective drama with the tension and stakes of a thriller, as Shannon’s character, construction worker Curtis LaForche, finds his life interrupted by nightmares of an apocalyptic storm. Are they truly prophetic? Or is a family history of mental illness rearing its ugly head?

Shannon plays Curtis with such depth and nuance that unspoken sentiments come across as clearly as those that are expressed in dialogue. You feel like you’re in his head, struggling along with him, without needing to look to expository voiceover or any other shortcuts for aid.

“If you’re writing that part for Mike, he’s going to be able to fill all those spaces in between the lines,” Nichols told Consequence of Sound in 2016. “He’ll be able to fill those with all the subtext that you don’t want to have to write about. He can carry all of that on his face, and that makes him a very powerful tool.”

Many dramas focused on mental illness play like casually active volcanoes. Their protagonists dribble lava, chewing the scenery and bugging their eyes. They’re devotees of the time-honored tradition of heavy-handed award bait. Or they take the opposite approach, their lead characters struggling with depression, staring slumped and dead-eyed into the camera and attempting to emote.

Shannon plays Curtis as the build-up to an explosion and its aftermath. He Goldilockses it to perfection — never overdone or underdone but just right. There’s a pressure building underneath the surface. Curtis is close to falling apart in every scene, despite his desperate effort to hold himself together. The rising tension is communicated through everything from Shannon’s tone to his posture to the clench of his jaw. His performance never missteps or feels false.

While Curtis slips up a little here or there in keeping his struggles to himself as the hallucinations intrude on his waking life, he only fully loses control once. “There’s a storm coming,” is one of those cinematic stock phrases so overused that it tends to play as a bit of a joke no matter how solemnly it’s delivered. But when Curtis’ internal struggles finally boil over at a community dinner, Shannon accomplishes the near-impossible by turning this all-too-common expression into something that feels fresh and authentic. Some regard this scene — undoubtedly the films most explosive — as the highlight of Shannon’s performance, and it really is a superb bit of acting.

Confronted by Dewart (Shea Whigham), his estranged friend and former coworker, Curtis gets in a tussle that proves to be the straw that broke the camel’s back. “I said enough, goddamnit!” he explodes, flipping a table and earning the judging, horrified stares of basically the entire small-town.

“You think I’m crazy, huh?!” As he blows his top, describing the apocalyptic visions that have consumed his own thoughts to a community clearly unmoved by his warnings but becoming deeply fearful of him, the adrenaline rush fades and shame rushes in.

Shannon plays every emotional beat to perfection. He plays the wild-eyed, gesticulating, and spit-flying moment of rage dialed up to eleven with awesome grandeur — and then, more crucially, he hits all the quieter but no less important notes directly afterward with the same precision.

In a long, quiet moment, he looks to his family as he’s hit by the reality of the situation and the inevitable consequences of his outburst, rage giving way to remorse. In seconds he goes from daring onlookers to meet his beady gaze to his eyes brimming with tears, too overcome with shame to meet his wife’s gaze.

Another key moment that exemplifies the brilliance of Shannon’s performance comes later, quite close to the end of the film. Curtis has sunk his savings into building a storm shelter, an obsessive pursuit that has also cost him his job. He sees it as the one thing he can do to try to cope with — and exert some semblance of control over — the fears quickly consuming him.

One night, a storm does come, one severe enough to merit tornado sirens. So, Curtis takes wife Samantha (Jessica Chastain) and young daughter Hannah (Tova Stewart) down into the storm shelter. But then the rain and thunder stop and the winds die down. The family is faced with re-emerging, with leaving the underground bunker to return to the real world in all its unpredictability.

Curtis has the key to open the shelter door, but he can’t bring himself to do it. He tries to get Samantha to do it for him, but she won’t. She insists it’s something he needs to do himself — because it is. And eventually, he does, even though it’s very clearly difficult for him. He does because he knows he needs to keep facing his demons, to keep fighting. So he opens the door, and they emerge to a bright and sunny day, a battle won but an unending war left to fight.

Curtis’s struggle against opening the storm shelter door is a quieter scene, but it’s more powerful. The way Shannon imbues his voice with barely-contained desperation as Curtis tries to convince Samantha to stay in the bunker, that the storm is still raging outside, is truly masterful.

Samantha calmly reiterates that the storm has passed — that any lingering sense of danger exists only in Curtis’ head — as a message largely unspoken but nonetheless clearly received. “I’m sorry,” he repeats, between long heavy pauses and shakes of his head. Each “I’m sorry” is delivered with subtle but impactful variations in inflection. Shannon manages to convey what’s left unspoken with clarity.

The actor’s every glance and gesture tells you all you need to know as Curtis forces himself to comply with Samantha’s rational request in spite of the fear that consumes him. The way his hand trembles holding the key. The particular way in which he pauses, not just while finally resolving himself to open the door but again with his hand on the shelter door and the key in the lock and need to gather his courage once more.

I’ve never seen the scene played out on any screen larger than a mid-sized television, and yet, of thousands of movies I’ve seen, it’s one of the moments that looms largest in my head, the crowning jewel of an impeccable performance from a truly special film.