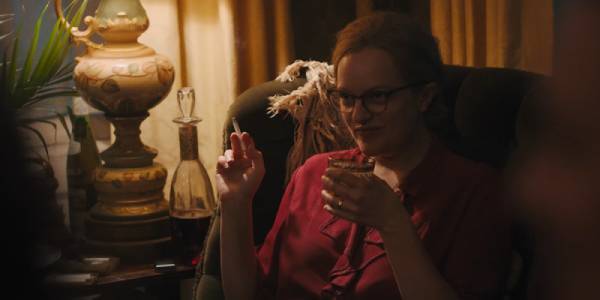 Shirley Jackson was, by most accounts, an odd sort. Her feverish gothic tales such “Hangsaman” or “The Haunting of Hill House” were not exactly considered a reasonable thing for a woman to be writing in the mid-50s. Yet her stories captured and terrified the imaginations of people the world over. For all this, she was reclusive and agoraphobic, rarely leaving her house.

For these issues, she took a cocktail of barbiturates and amphetamines, which surely must only have aggravated that anxiety. Despising the traditional female roles of housewife ascribed to her by her husband’s colleagues and the small town of North Bennington, Jackson became more and more ostracised by her community until her untimely death at the young age of forty-eight.

Shirley is not a standard biopic. It has, in fact, been labeled as an anti-biopic. Adapted from Susan Scarf Merrell‘s “Shirley: A Novel”, it posits an entirely fictional situation where Jackson and her husband entertain a young couple for an unspecified period of time. It weaves together this fictional narrative with realistic aspects of her life, such as her agoraphobia and alcoholism. It is as strange and seductive as Jackson‘s novels, so the tone here is fitting; one can imagine Jackson herself would enjoy the movie’s unwillingness to conform to any sort of expectation that the term ‘biopic’ might lend it.

Jackson is portrayed formidably by Elizabeth Moss, who is perhaps arguably the most versatile actress of her generation. Her refusal to be pigeonholed is admirable, and here she may have found her greatest project yet. She plays the author with a faint wisp of bemusement and wryness; her sour gaze falling over everything she disagrees with. She is clever, and far above the rigid structures of the society, she disdains so much. It is amusing to watch her toy with people, such as when she throws red wine over the sofa of a faculty party her husband has all but forced her to attend. The anxious homeowner comes running over, begging Jackson to please ‘dab’ the wine with a towel to get it out, but Jackson continues to rub the stain much to the woman’s horror. It is an appropriate metaphor for Jackson‘s life: whereas she is expected to dab, she always rubs.

Her husband Stanley (played wonderfully by Michael Stuhlbarg) is a flamboyant professor, with whom she shares a rocky relationship. They clearly have a deep affection for each other, but the problem is they seem to relish annoying one another. It’s perhaps for this reason that Stanley invites his teaching assistant Fred (Logan Lerman) and his wife Rose (Odessa Young) to stay with them until they can find a place of their own. Jackson, of course, is not happy with this outcome but soon takes a liking to Rose, with whom she shares a fascination for dark stories. In fact, an initial scene features the young couple having sex in a train carriage after Rose finds herself aroused by reading Jackson‘s short story “The Lottery”, for which she has recently received acclaim. It’s an interesting insight into Rose’s mindset, as well as her relationship with Fred, and sets the viewer up for her later interactions with Jackson herself. This is probably one of the most interesting aspects of Shirley; the strange dance Rose and Jackson do with each other, quietly but firmly sensing each other out, two women desperate to break the shackles of their 1950s gender constraints. It looks to be refreshing for Jackson, who throughout seems to grow wearier and wearier of her philandering husband’s showboating antics and abrasive treatment of his young protégé Fred.

No Moss on Moss

Suitably, the director Josephine Decker has no interest in conforming to expectation either. Her most recent effort Madeline’s Madeline, bears a similarity to Shirley, and it feels like she is in her element here. Shirley is filmed with a claustrophobic lens, mostly set inside Jackson‘s house, and with an atmosphere so tense you half expect the characters to explode at each other in any given moment. The foursome clash with each other in such desperately quiet ways, rarely ever directly confronting the issues facing them. It can be tedious on occasion, slow as dripping honey throughout, and might grate on those hoping for something a little edgier. It does reward patient viewing, however. Mostly because of Moss: she is always completely mesmerizing, destroying everyone around her with a few well-placed words. Moss never loses sight of Jackson‘s vulnerability, though. There are moments – such as when Jackson watches her husband blatantly flirting with women at the faculty party – where we see how much pain Jackson is in, how tired she is of everything. Moss plays it well, ensuring the character is never one-dimensional, oscillating between bitterness and helplessness. It’s impressive to see how much depth Moss is able to mine from Jackson and makes Shirley compelling viewing.

There are a few artistic licenses taken here: Jackson and her husband are presented as childless when in reality they had four children. In fact, Jackson wrote books about raising children and one can’t help but think it would have been interesting to see how this side of her could have been represented. Alas, it was seemingly jettisoned in order to make space for the relationship with Rose and is understandable.

Ultimately, your experience of Shirley will depend on your tastes. It is decidedly strange and non-conforming, veering left when you expect it to go right, refusing to settle at all. This is a refreshing change for a biopic and it’s admirable what was attempted here, but it doesn’t always work. It may test the patience of some, being altogether too slow at times, and could perhaps be accused of pulling its punches a little, here and there. It’s the performance of Moss, however, which will be talked about afterward. She anchors Shirley and imbues her character with plenty of depth and subtlety. You never really know what’s going to happen next when Moss is on screen and it’s this unpredictability which lends Shirley its most interesting aspects. The movie itself may not linger in the minds of viewers, but Moss‘ performance almost certainly will.

Shirley Jackson was well known for her gothic novels. Which one was your favorite? Let us know in the comments below!

Shirley will be released in the UK on October 30th. For more information about release dates, please click here.