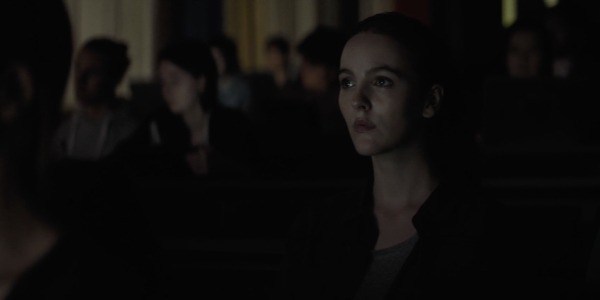 Traumatic events have a way of exploding us. They reassemble us again afterward, but we’ve changed, completely and irreversibly. In Rose Plays Julie, a dark Irish thriller from Joe Lawlor and Christine Molloy, trauma, and the reconciliation with it, soaks into every scene.

Lawlor and Molloy also wrote the film, which screened at Nightstream’s Virtual Film Festival this past weekend (as well as Melbourne International Film Festival, where our very own Sean Fallon previously reviewed the film). It’s visceral and elegiac, a perfect slow-burner awash in the blood of old wounds reopened.

Maybe It Never Healed At All

Ann Skelly plays Rose, a vet school student undergoing a major identity crisis. Since learning she’s adopted and that her biological mother, Ellen (Orla Brady), requested not to be contacted, Rose has been obsessing over her.

So she takes the leap and meets Ellen in person — and learns her mother’s life was entrenched in trauma, shame, and pain. From that meeting, Rose Plays Julie turns into a masterful two-hander as these women cautiously step into the past to investigate their traumas and hopefully find some kind of actualization.

Rose doesn’t stop her search through her history with Ellen. She’s desperate for answers, though the more she turns up, the more enraged and tormented she feels. As she moves deeper into Ellen’s past, including meeting Ellen’s former boss, Peter (Aidan Gillen), Rose plays “Julie.” Julie’s an actress, requesting a position on Peter’s archaeological dig to help her “research a role.”

Sometimes, the Rose Plays Julie is a little too on-the-nose. The archaeology-as-metaphor works well enough, but in a film about trauma, sexual violence, and the evil of men, Peter says he’s drawn to the science because he’s obsessed with “unlocking the past,” and he’s even working on a book pointedly titled Below the Surface. The book might as well be called, Do You Get It Yet? Lawlor and Molloy balance this straightforwardness with tonal blackness that reminded me of The Killing of a Sacred Deer’s odd, demented detachment.

Much of the film’s distant emotionlessness comes from Skelly. Rose is naturally apprehensive of strangers and rarely lowers her guard. But with her alter ego of Julie, she has an excuse to put on an act, to use her terse, observant nature to her advantage.

In the film’s enormously unsettling final act, there’s a great moment when Rose is waiting outside Peter’s house, face blank and cold, and as soon as Peter walks into view, a smile snaps on her face. We see the performance begin, the instant she switches from Rose to Julie.

We meet Rose when she’s in the middle of a module on euthanasia. Much of the film feels like witnessing a slow death. Photographed by Tom Comerford, the Irish countryside feels dark and sinister. Deep shadows mar the landscape, as though a storm’s perpetually on the horizon, and that infiltrating darkness carries over into the editing, too, which frequently returns us to the site of Ellen’s trauma, reminding us of the intense effect that place can have on a traumatized individual.

Skelly, Brady, and Gillen’s performances are magnificently subtle and quiet, perfect for a film thriving in silence and internality. Every line of dialogue lingers, as though they’re constantly testing one another’s boundaries. The stillness is occasionally enriched by Stephen McKeon’s wonderful, chilling orchestral score. The music somehow feels searching, as though it’s grasping around in the dark.

There’s a story in Roxane Gay’s Difficult Women in which two sisters are kidnapped, and their captor does horrible, reprehensible things to them: “We were young once,” Gay writes, “and then we weren’t.” Rose Plays Julie — which has nothing to do with Roxane Gay — still fixates on that same moment. Both Rose and Ellen have traumas that separate them into two people: who they were before, and who they are now.

As eerie and depressive as the film gets, Rose Plays Julie shows us the other side of suffering Rose and Ellen are after. Sometimes that comes in fleeting moments of justified violence, as when Rose intervenes in a potential sexual assault by bashing the dude’s face in with a fire extinguisher. And sometimes it comes through more somber, reflective moments, like Rose lying on a bed in the darkness, dreaming.

Though the film has played at festivals this year and last, its release has been postponed until 2021. That’s unfortunate, as it’s one of the most singularly mortifying and gripping new films I’ve seen in years. Rose Plays Julie archaeologically digs through human suffering, one fragment at a time, bringing its characters’ traumas out to see the light. There’s a kind of horror to the unearthing, though all of Rose Plays Julie’s characters are, in some way, haunted.

Are you excited for Rose Plays Julie? Or, if you’ve seen it, what do you think of it? Comment below and let us know!