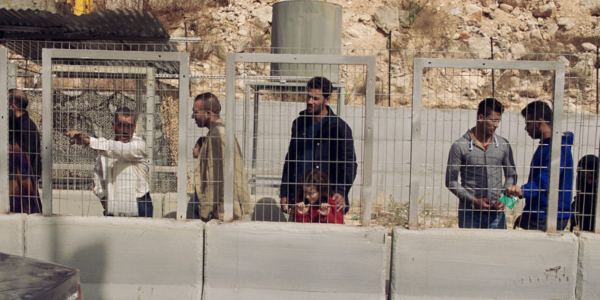 For many, running errands like picking up milk or posting a letter is a quick pop to the shops. Want to get a coffee afterward? Sure. Need to order a new fridge because yours is on the fritz? Don’t worry, delivery won’t be a hassle. In director and co-writer Farah Nabulsi’s short film The Present—alongside co-writer Hind Shoufani—a loving family living in Palestine contend with the difficult reality of everyday life as they are separated by the highly controversial West Bank barrier built by Israel.

Opening to family man Yusef (Saleh Bakri) asleep outside as he patiently queues for work—a painful reminder of Palestine’s isolation from the world. He waits to cross the intimidating border crossing, Checkpoint 300, at the West Bank. Palestinian residents are herded like cattle through a crossing notorious for its long queues, volatile conditions, and horrendous incidences of broken ribs and suffocating commuters during rush hour. In a short scene, Nabulsi captures the dehumanising and frustrating experience of living under occupation, a place where injustices have been normalised and basic human rights are scarce.

“WHAT DO YOU WANT FROM ME? I JUST WANT TO GO HOME.”

On his wedding anniversary, Yusef crosses the West Bank to go food shopping and to get a present for his wife Noor (Mariam Kamel Basha). With daughter Yasmine (Maryam Kanj) in tow, the pair face checkpoints, IDF soldiers, dehumanising cages, and relentless roadblocks. What should be a fun and easy day turns into an exhausting trek to get home for Yusef and Yasmine.

Before their day fully begins, awaiting them—and any Palestinian citizen at the border crossing—are intrusive and tedious questions, demands for identification, and absolute apathy from the soldiers regarding any citizen’s welfare. The Present manages to effectively depict the everyday struggles Palestinians face, even over the most menial and monotonous aspects of life, and how exhausting a simple task can become. Unfussy camerawork and a limited score permit its subject matter to shine.

Consisting of part-wall and part-fence, the imposing structure stretches for 708 kilometres and lingers over Yusef’s day; however, welcome tender moments come from the loving relationship between Yusuf and Yasmine. Yusef is a good husband and father and he strives to protect his daughter despite the deplorable ways he is constantly treated. Bakri expertly manages to hide his pain from his daughter until the constant battle becomes too much for him. He attempts to shield her from their grim reality, offering glimmers of love and joy, such as a warm embrace or a glittery tiara on their trip together. Bakri and Kanj are entirely believable and their gentle moments together effortless, with a seam of humour running through.

Nabulsi, a Palestine filmmaker and human rights advocate, is the daughter of Palestinians who made Britain their home in the 1970s. Born and raised in London, Nabulsi turned her attention to filmmaking in 2015, producing films inspired by contemporary issues in Palestine. Nabulsi uses The Present to shed light on Palestinians’ deprived freedom of movement, a basic human right.

Palestine continually frequents the news but its people and how they live is seldom touched upon with nuanced understanding. It is easy to forget these are actual places that deserve to exist beyond the political conversation, signifying a struggle that transcends a place.

A simple narrative evolves into an astutely reflective study of the experiences of so many Palestinians, creating an affecting look at life governed by military occupation and the limited freedom of movement for the people within the region. The Present is a powerful and heart-wrenching film.

Have you seen The Present? What are your thoughts on the West Bank depicted in film? Let us know below.

The Present first premiered at the Clermont-Ferrand International Short Film Festival in February 2020. Find out more about the film on IMDb, or on Farah Nabulsi’s website.