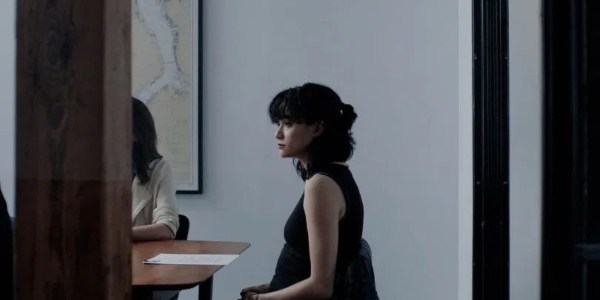 Too often, sexual harassment is framed as an isolated incident between the abuser and the abused. Though we are starting to see days of reckoning for prominent men in power, there are still countless other stories and experiences that go unnoticed, and they will remain unnoticed until we – women and men – actively change the narrative.

Doublespeak may be a short film, but it joins other recent features like Promising Young Woman and The Assistant and dives into how a system that is supposed to protect people can fail again and again. The damage goes beyond the abuser; it is in the people who are complicit, in denial, and ignorant. Whether it is at a school or at an office, the same broken system of people in power remains.

Based on her own personal experience in reporting sexual harassment, writer/director Hazel McKibbin condenses all the trauma, disappointment, and torment into nine minutes, as we watch Emma (Angela Wong Carbone) file a complaint against her male supervisor and speak to the HR management team.

It’s The People in Power and Those Who Are Complicit

But before the seniors get started, we’re already clued into how it’s going to go. McKibbin sneaks in visual ideas like placing both men on the same side of the table, both facing down Emma not as allies but as obstacles to confront. And then the formalities and uselessly polite jargon come out, and it becomes obvious that the managers prefer to dance around the subject and complicate a simple truth: Emma was repeatedly harassed. The occasional flashbacks, intentionally filmed in extreme close-up, are carefully placed at the perfect time. Even when McKibbin claims these moments were improvised, they feel planned and forced upon us like raw, invasive memories.

But perhaps what hurts the most is the presence of the female office manager sitting by Emma’s side. They share glances at each other, often in reactionary ways. We think she would help, or at least we hope she can. The scene is almost set up to make us believe she and Emma went into the meeting together. In reality, she ends up being just as tolerant and damaging as the men, if not worse.

Even though Emma doesn’t speak as much in the film, Doublespeak speaks volumes during its moments of silence. It’s all thanks to Carbone’s remarkable ability at internalizing Emma’s emotions and conveying every bit of that turbulence through the eyes, the glances, the gulps, and the sighs of contempt. Praise needs to also be given to McKibbin’s guidance in direction. In every second of Doublespeak, the camera gives us the chance to always see Emma and see how she’s feeling and responding to the people around her. At other times, the camera will maintain a sense of distance, forcing us to become spectators, powerless, and unable to help Emma see her ordeal acknowledged. It’s a powerful, realistic, and universal depiction of a personal experience, right to the very last stomach-churning shot.

Structurally, Doublespeak is a simple short; it’s essentially three scenes back-to-back. However, it achieves its goal to the maximum effect. It’s devastating, put together with elegance and poignancy to ask for our empathy. The fact that its nine-minute runtime feels like emotional purgatory is a testament to McKibbin and Carbone’s subtleties and sensibilities. I haven’t stopped thinking about the film since I first saw it.

Doublespeak: A Systemic, Cultural Crisis We Can’t Hide From

In fact, calling these events “cases” might be the wrong approach; it allows for false and misleading rhetoric on how sexual harassment is shaped through isolated events. Reality is far more complicated than that. We face a societal, systemic, and cultural crisis, and we all must take a good look at ourselves and see if we are part of the problem. For real change to happen, it must start with every single one of us taking that step.

Doublespeak premiered on January 28th at the Sundance Film Festival 2021 in the Shorts Program 4 block. It is now publicly available on Vimeo here.