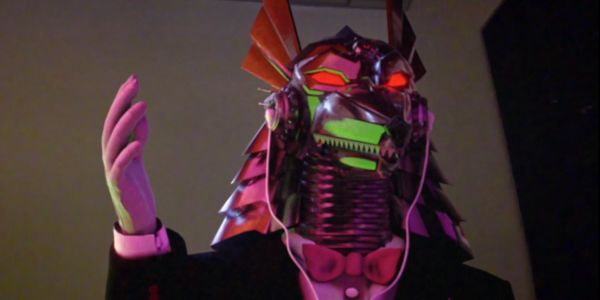 A Glitch in the Matrix is very much in the tradition of Rodney Ascher‘s shrewd, media-savvy filmic compositions, and yet, its inspired construction and ambitious mission statement propel it to the top tiers of an already distinctive filmography. There’s a lot to unpack with this movie. From the outset, the very title, “A Glitch in the Matrix” is something of a misnomer in that Ascher‘s narrative expands and elaborates on simulation theory in film and media of all kinds, beyond the visionary work of the Wachowskis into a litany of science fiction (films and literature) internet forums, video games, virtual reality and everything pertaining to simulation theory and the various theories regarding our place in a world that may more not be. The most glaringly prescient moments in all the theorizing and interpreting, however, arrive when we interact with the real world (as we know it) and the dissociative and isolating effects of media saturation and social isolation. And like Room 237, The Nightmare, and The S from Hell, Ascher plunges into the unexpected avenue where human psychology and pop culture cross wires, igniting a shower of sparks that is illuminating, scary, and relentlessly compelling.

From the outset, A Glitch in the Matrix is a deeply immersive experience; this doesn’t look or feel anything we’ve encountered from the director’s oeuvre or otherwise. Just as the commentators are offscreen for Room 237, and the testimonials of sleep paralysis are horrifying recreations in The Nightmare, Ascher once again surpasses convention here where talking heads are presented as strikingly conceived full-body avatars. These glowing figures have an ethereal feel, there’s a level of contextual familiarity, yet it’s as if you’re communicating with a being that teleported in from another dimension.

As we’re covering the film’s thesis of simulation theory and getting swirled into a richly textured habitat of animation, film clips, 3D compositing, video game footage, A Glitch in the Matrix isn’t just a pop culture grab bag. We volley from Plato’s Republic, Descarte’s Meditations, with a recurring forum by Phillip K. Dick, who feels like a posthumous emcee introducing the film’s various chapters. The remarkable throughlines and connections that the film presents is an index that includes theorizing on all levels; sometimes it’s like reading a Reddit thread; for other junctures, it’s as if we’re present at a Ted Talk. A Glitch in the Matrix is an inclusive forum that welcomes insights and stories that aren’t concerned with haughty academic credibility but more so with illustrating a compelling narrative and succeeds in doing just that.

Ascher outflanked his own singular vision in this existential techno-essay/investigative documentary that integrates all manner of media and the unique innovation is the Google Maps, Minecraft, and CG animation interludes that also comprise recreations from the various commentators, whose believe-it-or-not synchronicity stories give the viewing experience a human pulse amid the heady landscape. A Glitch in the Matrix is deeply rooted in the world of artistic innovation as much as it is in the machinations of the (or what could be) the world as we know it, and, at various points, we’re treated to sequences that reinforce that the truth is indeed stranger than fiction.

One story about a reckless sojourn in Mexico reverberates as if it were a VR dystopia thriller; the more sobering segue occurs when the film explores the more tragic influence with the case of Joshua Cooke. Back in 2003, Cooke‘s fascination with The Matrix, (and the goth-chic, trenchcoat style that it precipitated) metastasized into a fateful incident where he shot his two adoptive parents at close range with a shotgun. Cooke‘s disembodied recollection is chilling in its plainspoken and forward delivery (Ascher‘s interview took place over the phone with Cooke, now in his thirties serving his forty-seven-year sentence) against decrepit digital imagery that looks like a moldering, virus-twinged environment.

The film isn’t solely concerned with making a case or unpacking the controversial “Matrix defense” (formerly the “Taxi Driver defense”), but it feels like Ascher is drawn toward illustrating a dimensional exploration curiously and creatively. This isn’t a treatise on the ongoing debate about violence in media, but possibly a callout for better gun control and accessibility of proper health care for troubled teens and those struggling with their mental health. It feels like a mature and responsible creative decision to observe the isolation and disassociation that can occur when someone divorces themselves from reality; aesthetically, the film’s utilization of macabre digital exegesis strikes a memorable harmony.

Conclusion: Glitch Heard Round the World

A Glitch in the Matrix is an engrossing feature that looks and feels unlike anything else out there in any genre or style in filmmaking. Unlike Ascher‘s Room 237, Primal Screen, this takes place outside the horror genre, but there’s something that came to light that puts his latest into his craft and the subliminal resonance that makes his work hypnotically unnerving. The classic horror adage, “the fear of the unknown”, is inverted in a way where ambiguity is couched. And the more we delve, explore and gather various points of view we unlock a new brand of inquisitive essay filmmaking, and Ascher‘s artistic temperament is the best suited for the job.

Are there any other non-fiction filmmakers that echo movies like Room 237, or A Glitch in the Matrix? Sound off in the comments!

A Glitch in the Matrix premiered at Sundance and is available to stream here.

Watch A Glitch in the Matrix