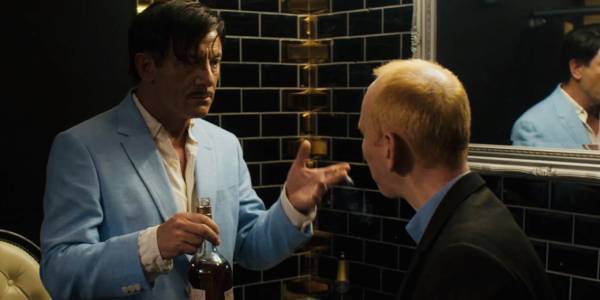 Every decade in musical history has its influences: Chas Chandler, Malcolm McLaren, Brian Wilson, Mark Ronson. They’ve all contributed to the zeitgeist of musical evolution. Perhaps few of them – in recent history at least – can lay claim to the sheer bombast, balls-to-the-wall craziness, and never-say-die determinism of Alan McGee. The Scottish producer behind the famous label Creation Records is responsible for some of the biggest bands of the 90s: The Jesus & Mary Chain, Primal Scream, My Bloody Valentine, The Libertines, and a little band called Oasis, who went on to some fairly big things.

Not one to be outdone by the bands he signed, though, McGee was a hard-partying, drug-fueled character all on his own. His antics were documented in his autobiography Creation Stories, back in 2013 and here, courtesy of screenwriter Irvine Welsh, and director Nick Moran, it finally comes to the big screen.

From the beginning, Welsh‘s influence rings out. The writer helped herald the advent of Cool Britannia when his 1993 novel Trainspotting was adapted for cinema and became one of the highest regarded British movies of all time. Its fast, choppy style, meta-referencing, black-as-night, tongue-in-cheek humour was refreshing in an era of stuffiness and is reproduced here to great effect. The narrative framework is mostly from McGee’s interview in LA with an American journalist, whom he regales with stories of his childhood in a strict household, dealing with a father who had no time for his eyeliner-wearing son, or the music he listened to. McGee’s teen years were spent trying to break into the music scene first with The Drains in Glasgow, and then with The Laughing Apple after he’d moved to London. Early scenes show the mad frenzy of 80s pop-culture as McGee and his bandmates throw themselves headfirst into the scene, rubbing shoulders with some of the biggest up-and-coming bands before McGee decides his future lies not in making music, but in producing it. And so is born Creation Records.

The narrative framework helps Creation Stories carry its brand of cheeky satire well; McGee (as played by Ewen Bremner, himself a Trainspotting alum) is a hilarious storyteller, and the action plays out in a very unsubtle way as McGee’s own brand of particularly Glaswegian humour is brought to bear: for example a scene where McGee is discussing selling his company to another record producer (played by a straight-faced Paul Kaye) who tells him that selling his company doesn’t mean he’ll lose control of it. This dialogue happens while Kaye‘s character drops his pants, bends over the table, and a businessman in a suit, smoking a cigar, proceeds to sodomize him. It’s completely mental but indicative of the type of humour Welsh himself is known for.

Elsewhere, other characters pop up to add a little extra flavour: Jason Isaacs plays an eccentric and flamboyant English producer in LA who takes McGee on a wild night, indulging in all manner of drugs, before attempting to offer a beatboxing paraplegic a record contract in a crack den. Thomas Turgoose (he of This is England fame, except now all grown up) plays Dick Green, McGee’s mild-mannered associate who is often caught staring wide-eyed at the carnage in front of him. Even Jason Flemyng makes an appearance as a Scottish promoter who suggests a new – and not entirely appropriate name – for the young Oasis.

It’s all wild fun and seems to zip by despite its two-hour plus runtime. Bremner is excellently cast as McGee; a man who simply doesn’t want to give up on his dreams. His rise from the humble beginnings of a Glaswegian suburb to the apex of the British music industry is inspiring and although he can be difficult to like, Bremner always finds ways to make McGee endearing enough that you cheer him on no matter what.

Later scenes are where the momentum begins to run out. McGee got sober in the mid 90s after suffering a nervous breakdown, and then subsequently got involved in politics. This leads to an altogether bizarre scene when McGee – who famously backed Tony Blair and had Oasis do the same live on stage – turns up at Chequers (the country house of the incumbent Prime Minister) to meet Blair and is also greeted by… Jimmy Savile. The notorious pedophile is only on screen for a few moments but his presence is felt and the question of why such a person would be present at the residence of the Prime Minister is only briefly touched on.

Creation Stories will appeal most to those with an interest in 90s pop culture as it is unabashedly content to revel in those memories. The fast pacing, black humour, and in particular hilarious performance from Ewen Bremner ensures that there is plenty for casual fans to enjoy too. Although the pacing may lag at times, especially near the end, the bombastic opening more than makes up for it.

Creation Records were responsible for many famous bands in the 90s. Which was your favourite? Let us know in the comments!

Creation Stories had its world debut at the Glasgow Film Festival on 24th February.