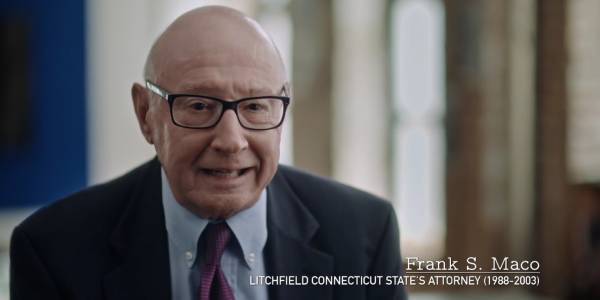 So we come to this, the final episode in Amy Ziering and Kirby Dick‘s four part docuseries Allen v. Farrow. The overwhelming feeling by this point is of a series determined not to establish the facts but to definitively portray one side’s experiences in what has been no doubt a long and difficult ordeal, especially for Dylan Farrow. One can’t help but believe her; the earnestness she displays, the anxiety and dejection when she speaks. Something happened, we can be sure. Whether you believe Mia Farrow‘s version – that Dylan was molested by a father who should have been protecting her – or Woody Allen‘s – that Mia Farrow planted the false memory in Dylan from a young age to turn her against him – the real victim is and always has been Dylan, who was caught in the middle of a vicious firestorm fallout between her parents.

Regardless, this is now the fourth hour of what can only be described as pro-Farrow propaganda. Allen has dismissed the docuseries as a “shoddy hit job” and while he may have gotten the shoddy part wrong, it’s hard to disagree that this comes across very much as a hit job.

We open where we left off last time out: Frank Maco deciding that although he has “probable cause” to charge Allen, he will not do so in order to spare Dylan the ordeal of a trial in which she would need to give evidence. This seems wholly absurd on the face of it: surely if there is probable cause then there is also an obligation to charge? The idea that they believe Allen to be a dangerous sexual predator but decide to leave him free to prey on other young girls is almost farcical. If nothing else the decision not to pursue charges is, in itself, a gross miscarriage of justice.

After this, we pivot onto what could be said is the core of this episode: the idea of Allen‘s art versus the ‘fact’ of his predatory nature. As Dylan grows up and the family continues to reel from the fallout of Allen‘s fight with Farrow (the family “went into survival mode”, Fletcher Previn tells us), we see Woody Allen continue his successful career with more and more plaudits. Dylan‘s sisters Quincy and Minh attest to Dylan‘s increasing depression and anxiety. Dylan explains how she never spoke about it, to anyone. This affected her teen years where she dated only one boy, and subsequently broke up with him when she realised he would want sex from her at some point. A strange home video follows thereafter in which Farrow essentially interviews her obviously uncomfortable daughter about her breakup.

Meanwhile, Allen appears on Parkinson to discuss his career in the aftermath of the allegations in which he shrugs off the idea that he will be more hated after this. “All it did”, he said, “those people who never liked me, reconfirmed it”. News segments show Allen and his new wife Soon-Yi honeymooning in Venice amid a crowd of people cheering him. The post-allegation experiences of Dylan and Allen were night and day.

Farrow throws herself into her charity work after she claims “Woody told me no one would ever hire me again”, becoming an ambassador for UNICEF on the issue of polio, from which Farrow suffered as a child. She goes to Darfur and builds awareness of the genocide there. Satchel – now going by his middle name of Ronan – goes off to college and becomes a journalist (he would later become known as one of the key players behind the fall of Harvey Weinstein). There’s a sense of having moved on from the whole affair.

The Culture of Celebrity

We see stars such as Dianne Wiest, Scarlett Johansson, Penelope Cruz, and Javier Bardem praise Allen‘s genius as a “remarkable artist”. Claire Dederer then makes a good point that we want to believe the artist whenever there’s an allegation, as we’ve “spent our lives listening to their side of the story”. It’s a great point to make and one of the most salient in the whole series. There is a culture in our society which deifies celebrities, makes them virtually untouchable. Ronan Farrow gets one of the best lines of the series when he says people have “an identity association with it, where it’s existential to them that they grew up loving Woody Allen“.

To back up this point we’re directed to the infamous Michael Jackson scandal (in which Jackson was accused of molestation by several people) as well as Bill Cosby and Roman Polanski (who was accused of raping 13-year-old Samantha Geimer, but who fled the country before he could face prosecution. To this day he hasn’t set foot on American soil). This last example is interesting because Mia Farrow herself came out in defence of her friend Polanski, whose crime was even more egregious than the one Allen was accused of – although she later tweeted to Geimer an apology for not believing her. Geimer recently tweeted her displeasure that she was used as an example in this documentary as it does not represent her beliefs.

This line of inquiry is the most interesting aspect of Allen v. Farrow in that it’s one of the few moments not directed at Allen, but rather at the culture as a whole. One wishes there was more of this abstract investigation into our society rather than drilling down into one specific side. As it is, comparing Allen to Cosby and Jackson is disingenuous. Both had numerous allegations levied against them (Cosby has been accused of a jaw-dropping amount of assaults – each one very similar in their specificity – and has, at the time of writing, been convicted of three counts of aggravated assault; meanwhile Jackson was accused by several families with young boys and settled out of court to the tune of millions of dollars), and in Cosby‘s case have faced justice. Allen, by contrast, has only ever been accused once, was found not guilty, and has since adopted two children with Soon-Yi (something that he surely would have been subjected to a thorough investigation for).

Moses and the Train Set

We come to the recent past with Dylan addressing the open letter she wrote in the New York Times and her shock and sadness that she was not allowed ownership of her own experiences, with many people weighing in on the topic. One of the people who weighed in was Moses Farrow, Dylan‘s brother, who made the claim that none of it was true and that Mia Farrow had likely coached Dylan into her beliefs. Fletcher and Daisy Previn claim that Moses is lying, with Dylan calling the claims “ludicrous”. This is a strange reaction because if nothing else Allen v. Farrow wants us to believe survivors of trauma. To defend Dylan after sharing her trauma, and then call Moses a liar after sharing his, is just another example of the partisanship on display here. This once again reinforces the belief that you cannot believe anything you’re being told because the narration is so clearly biased. Then, as proof of Moses‘ complicity in Allen‘s cover up, we’re shown a picture of a Mother’s Day card Moses wrote to Farrow! It beggars belief that experienced filmmakers such as Ziering and Dick would consider this a “gotcha”.

And then we come to the infamous train set. In Dylan‘s 2014 op-ed for the New York Times she alleged to have focused on a train set to distract her while Allen was abusing her. This is completely new information that did not come up during the original trial. Moses suggests it was a specificity added to give the story more credibility, that there was no train set. But Ziering and Dick show police reports that say there was a toy train in the attic, going as far as to show diagrams from the investigation detailing where the train was and its circumference in the attic. Things get more confusing when you learn that Kristi Groteke, nanny to the Farrows, claimed the trainset was kept in a trunk in the attic and assembled in the living room. The trainset, however, is big enough for a child to sit on. Which would then make it impossible to use within the attic crawlspace. These kinds of details are left out of the docuseries, but which add another confusing layer to this complex drama. In any case, it feels as though the trainset is certainly not the “gotcha” the filmmakers want it to be.

The Art & the Artist

We circle back around to the key theme of the episode: separating the art from the artist. Dylan makes an impassioned speech that she is sick of being told she matters less than Allen because of the latter’s fame.  “What do we do with great art made by bad people?” Claire Dederer asks. There is no easy answer to this question, though Dederer herself seems to come down on the side of art enduring despite the actions of the artist. Of course, this argument says nothing about the issue of financial implications: does supporting Allen despite the accusations have a moral aspect, given that he is gaining money from this art? Celebrities have since come out and donated the fees they earned on recent Allen movies to charity, vowing never to work with the director again. Others, such as Alec Baldwin and Javier Bardem, are more sanguine, stating they have no right to make judgments.

As the series comes to a close, we’re introduced to Dylan‘s daughter. There follows a lovely scene between Dylan, Mia Farrow, and Dylan‘s daughter where the three of them spend time together in the garden. There’s hope in this, you feel. Out of all the tragedy, the pain, the anguish, there is some hope and some happiness. And perhaps that’s all we can ever hope for. We’ll never know the full truth, never understand the depth of complexities in this issue. Armchair experts could spend years disseminating every fact in the case, but it will never be enough. Perhaps the only thing to do is to move on, to try and rebuild from this disaster. Maybe that’s enough.

Allen v. Farrow – from the first episode to the last – has been an exercise in biased reporting. It never represents both sides of the argument and adds nothing new to the discourse. Perhaps its lasting legacy will be an insight into the life of Dylan Farrow herself, and the struggles she has undoubtedly faced in one way or another. There was a wider issue to discuss here, about the nature of art versus artist, and you wish the Ziering and Dick would have delved further into that topic. However, as it is, this last episode contains the same half-truths and biased opinions as the other three, and that is very much a shame.

Now that it’s over, we’d love your views on the documentary and the wider drama as a whole. Please let us know your thoughts in the comments below!