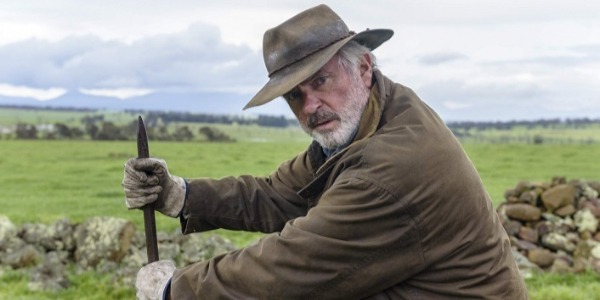 Early on in Rams – Jeremy Sims‘ Australian remake of the 2015 Oscar-nominated Icelandic drama of the same name – estranged brothers Colin (Sam Neill) and Les (Michael Caton) are forced to nestle together when they are the last two competitors in their remote Western Australian town’s annual prize ram contest. Despite the tension that ripples throughout the outback denizens of Mount Barker – portrayed by a murderers’ row of local and international talent including Miranda Richardson, Asher Keddie, and Wayne Blair – the whole affair seems to be business as usual, and even when the tiny trophy is handed to a giddy Les, the whole ordeal seems to stabilise the equilibrium in this tight-knit community.

This earnest composure is rattled when Les’s prize ram is diagnosed with a rare and lethal illness, which forces government authorities to purge every sheep in the valley, vanquishing the singular active drives for both brothers. The idea of an unforeseeable virus disrupting our natural way of living resonates with an unexpected grimness this year, but Jules Duncan‘s screenplay reaffirms that at our most undeniably bleakest moments is when the best of humanity has the ability to shine brightest.

Ahead of Rams’ Australian theatrical release on October 22nd, I had the chance to talk with Rams director Jeremy Sims about adapting the original Icelandic drama, the timeless quality of Mount Barker, and working with Michael Caton‘s dramatic side.

Alex Lines for Film Inquiry: I read in a 2018 interview that was written just before you shot Rams, that you hadn’t had a chance to meet with Grímur Hákonarson, but you mentioned that he was very collaborative – I wanted to ask if you’ve been able to meet him since then and if he’s seen the film?

Jeremy Sims: Well, the answer is I haven’t met him. I wasn’t keen to talk to him beforehand because I wanted to make my own movie. My knowledge of the film came really from seeing it at festivals when I was touring Last Cab to Darwin. Then I thought, look, I know enough of it to now work on our version of it.

But the producers, Janelle and Aidan, are good friends with him, and they stayed in touch all through the process and he got to read the various drafts of the script. We were all going to get together and see the film if it hadn’t been for the virus. We would’ve been at a bar somewhere in Scandinavia probably talking about it, so it’s a shame. I’d love to meet him, and I know he loves the film.

How do you feel shifting the setting from this sort of cold Icelandic countryside to the dry West Australian environment affected the material or the subtext of the characters and their central relationships?

Jeremy Sims: I don’t think it affected it at all, actually. That story, the story of the two brothers, is, in its essence, it’s an Icelandic saga. It comes from the same place as the story of Cain and Abel and every other culture has this story of two brothers, with most Western cultures set up with this idea that the sons inherit from the father. So the idea of two sons that are diametrically opposed, and that one is favoured by the father and one isn’t, going to war with one another when it was left to them, that story has been around for thousands and thousands of years.

So when Grímur started working on the original Rams, he was copying a saga that he grew up with and his uncle told him. I just approached it from that point of view of going, well, I’ve had this saga passed onto me, so I’m going to tell that. As far as two men isolated in the country, when we told people in Mount Barker that we were making a film about two brothers that hadn’t spoken for 40 years and that they’d divided their farm down the middle, he said, “Oh, you’re making it about Pete and Dave that lived down at whatever.” Everyone recognizes the story. From that point of view, whether it be the searing heat of a West Australian summer or the freezing cold of an Icelandic winter, that part, nature, played the same role in my version of the film as it did it in the original.

One formal aspect of the film I wanted to touch on was the stripped-down, historical quality of Mount Barker and its various characters; it feels lost in time, you rarely see a mobile phone or a modern signifier, if you told me this film was set in the ’80s or 90s I’d believe you; did you feel that this analog quality was an important factor in your realisation of this world and its inhabitants?

Jeremy Sims: Well, we certainly knew early on that neither of our principal protagonists were likely to like mobile phones. They’re old men on their phones and once I started working with Clayton Jauncey on the look of the film, I certainly didn’t want to get to the point where I’d say, “Well, why don’t they just call him?” That he’d have his phone with him out in the middle of the sheep farm. We just went from the premise that they didn’t carry phones.

And if you’ve been to any West Australian country towns, for the most part, if you take the vehicles out of it, they look like they are in the ’70s or the ’80s. Mount Barker is a beautiful town and the story didn’t revolve around modern ideas, although it turns out that we couldn’t have been more modern with a pandemic. It’s interesting that you picked it up, but yeah, we did it on purpose. We didn’t want to make the modern world. We didn’t want to make modern technology an issue in the movie.

Between this and Last Cab to Darwin, you’ve really been able to flesh out and put the spotlight on the strong dramatic chops of Michael Caton, who I think still carries the national personality of being the blue-collar funnyman, so as an actor yourself, how do you navigate reshaping that persona in these more measurable roles?

Jeremy Sims: Oh, look, it’s been great for me that people see him as the guy from The Castle or Uncle Harry on TV. Because I’ve worked with him as an actor, I just knew how skilled he was. That’s a really hard thing to explain to people, the skill to walk in front of a camera and know where you are and what to do and how to reflect the tiny things that tell a story. His skills are unmatched in our country. He’s one of the most experienced screen actors, and so is Sam for that matter. Then you add Miranda Richardson to the mix and you’re getting to direct like Rolls Royces.

For me, knowing Michael well, knowing that he has that potential, that the real Michael Caton is the thoughtful, interesting, volatile man. He has a dark side and doesn’t mind a drink, either, so that character, although it seems a stretch to the audience that know Michael Caton, I knew he knew enough of that character. And he grew up in the country and he has a family that doesn’t speak to one another. I mean, he understood all of this stuff. I’m actually surprised people are shocked that he’s so good in it because I knew he would be.

I think it’s that whole thing with comedians, like Jim Carrey or Robin Williams where they go, “Oh, wow.” It feels like a surprise for some reason.

Jeremy Sims: All comedians work with darkness. That’s why they’re funny. If you look at the lexicon of American film stars from the last 30 years, 90% of the male American film stars are standup comics when they started because they look at the world and they go, “Isn’t that fucked up” in how they approach it. Look, Caton is just a really lovely actor and getting him and Sam together was perhaps the best piece of directing I did on this film, I worked hard to get them together.

You touched on it before, but how differently do you feel the film hits now coming out of this particular time?

Jeremy Sims: I suspect from the people that are seeing it, who went to the Father’s Day screenings and stuff, I suspect that it just couldn’t be more timely.

It’s kind of bizarre. I mean, I wish there was more of an opportunity for it to do the kind of numbers that I think it could do if all the cinemas were fully opened and we were all happily heading to cinemas. But I think they’re going to be open enough for people to go, “Oh, I don’t want to go and see a dark film. I don’t want to go and see a stupid comedy, either. I want something that’ll speak to where we are in the world right now.”

And weirdly enough, this film does. This community is dealing with some really big issues and all of them are human beings and they’re all arguing over what is the right response to this pandemic that we’re facing. So between the bush fires and a viral disease that’s wiping out the things that they love, we’re pretty much on the money.

Film Inquiry thanks Jeremy Sims for taking the time to talk with us.

Rams will be hitting Australian with sneak previews across the weekend of October 23-25, with the film releasing in cinemas everywhere October 29.